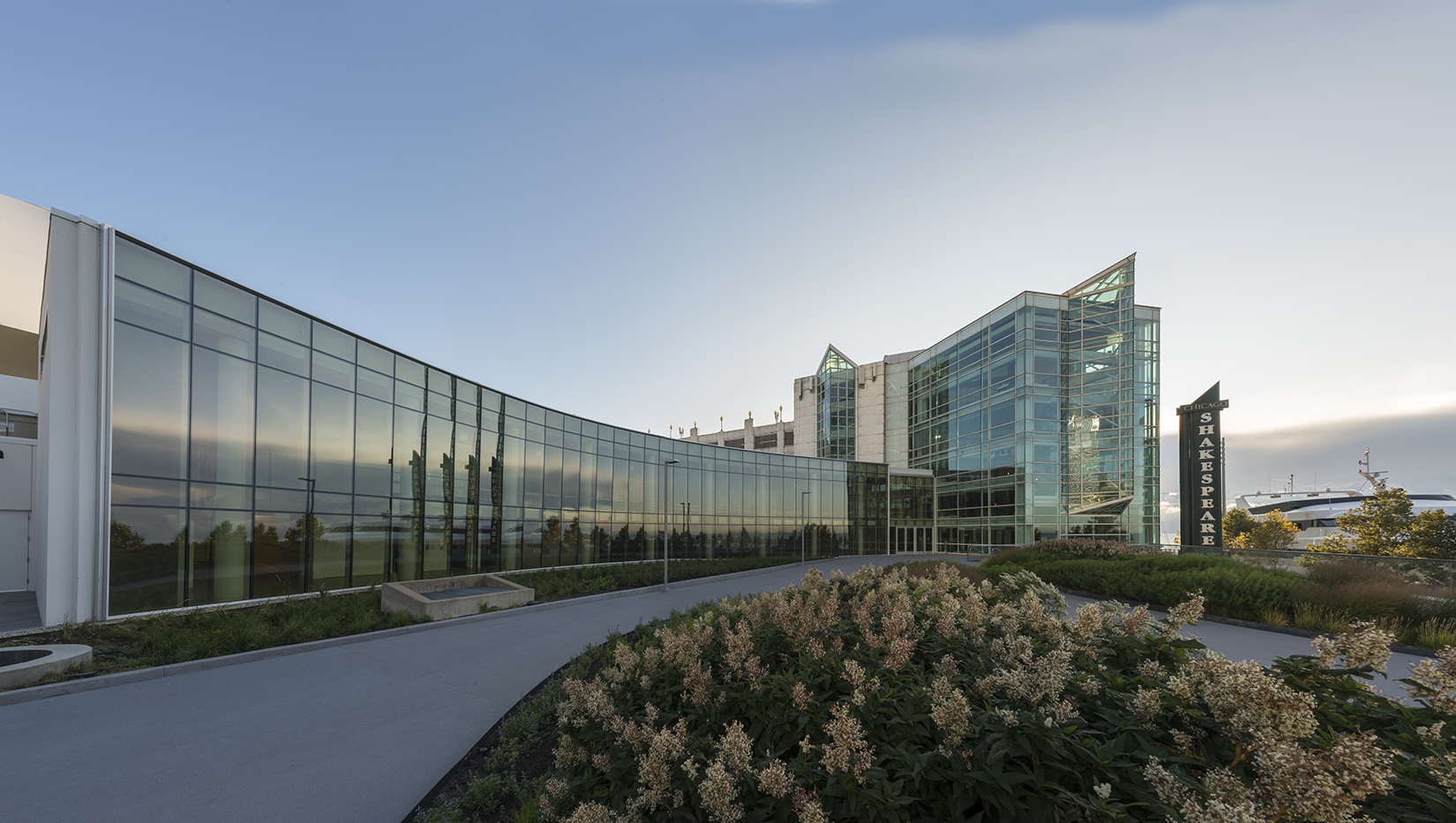 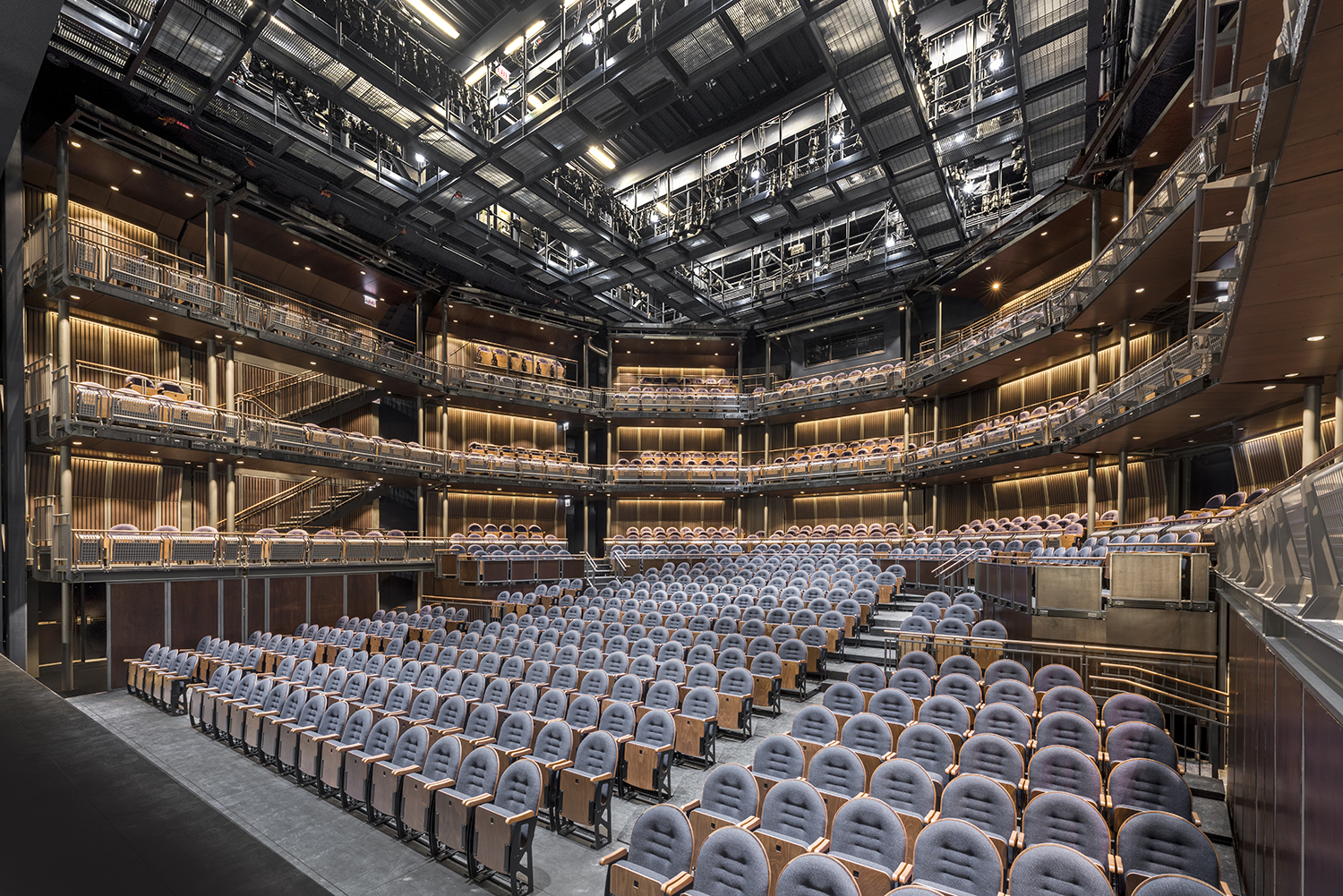 AS+GG Partner Gordon Gill will speak in detail about the project this Tuesday, October 24, 2017 at the Chicago Architecture Foundation Lecture Hall at 224 S. Michigan at 6:00 pm as part of the lecture Renewing our Cultural Resources through Design.

The Yard at Chicago Shakespeare is integral to Navy Pier’s Centennial Vision, a reimagining of the Midwest’s most visited leisure destination, which just celebrated its 100th anniversary. The new and renovated features are designed to expand Navy Pier’s impact and audience, showcasing a vibrant cultural, environmental, educational, and recreational landscape.

“We are proud to be part of the cultural reawakening of such a significant Chicago landmark as Navy Pier,” says AS+GG Partner, Gordon Gill. “Chicago Shakespeare Theater has been an iconic part of the pier since 1999 so it makes sense that it is leading the way in its renewal.”

Located adjacent to the existing theater, The Yard is artfully tucked beneath the signature tent structure and above the existing parking garage. This creative reuse of space places the new theater fully enclosed beneath the white tent and enabling it to share the existing stage house and backstage support spaces. CST made the decision to preserve the tensile fabric structure and repurpose the identity of the tent for The Yard and the greater Chicago Shakespeare Theater campus, saving millions of dollars in removal construction fees and preserving the iconic look. There are future plans to use the white canopy as a canvas for artistic light projection effects for upcoming performance nights.

Joining the Theater’s two existing theater spaces—the Courtyard Theater and the theater Upstairs at Chicago Shakespeare, The Yard connects to the original building through a glazed, two-story lobby and reception space with magnificent views of Lake Michigan. While the space takes advantage of the views of the lake, it faces direct southern exposure for much of the day. In order to mitigate glare and heat gain, a custom SageGlass® electrochromic facade was developed. By utilizing daylight sensors on the roof, the facade gradually tints as sunlight passes across its south face. This highly sustainable and technologically unique solution reduces cooling needs for the entire building during the hot summer months.

Gordon Gill says, “The glass selection was purposely chosen to create an architectural relationship between the existing and new buildings to capture and frame the views in both directions. To combat against the intense southern exposure on this curtain wall, electrochromic glass was an excellent material option that was capable of reducing the life-cycle operational costs for the entire project.”

Inside the new theater, a movable set of structural audience towers creates a new type of performance arena that can be reimagined and adapted depending on the artistic vision of the designers and directors. Countless new configurations can be created from the towers. Each of the nine mobile towers is about the size of a city bus stood on its end and contains three levels of seating. These complex structures, pioneered for this design by Charcoalblue, also hold extensive theatrical technology and connect into a network of HVAC components and sprinkler systems that will help accommodate audience comfort and safety.

“At the heart of the project is the theater, and here, we challenged the conventional theater construction process,” says Gordon Gill. “The Yard had to be an imaginative, creative space for storytelling, a space for an audience community to join together and experience a moment in time, a singular theatrical experience.”

AS+GG Partner Gordon Gill will be discussing The Yard this Tuesday at the CAF Lecture Hall located at 224 S. Michigan Avenue at 6:00 pm. Along with architects from Studio Gang and Wheeler Kearns Architects, Gordon will detail the challenges and success’ of Chicago newest theatrical space. For more information, visit the CAF website: http://bit.ly/2wZzsne

ABOUT ADRIAN SMITH + GORDON GILL ARCHITECTURE
Adrian Smith + Gordon Gill Architecture (AS+GG) is dedicated to the design of high-performance, energy-efficient, and sustainable architecture. AS+GG approaches each project with an understanding that architecture has the unique power to influence civic life. The firm creates designs that aid society, advance modern technology, sustain the environment, and inspire those around us to improve our world. In addition to several cultural and mixed-use projects in the United States, AS+GG is currently designing projects in Saudi Arabia, Dubai, Kazakhstan, China, and Canada. The firm was founded in 2006 by partners Adrian Smith, Gordon Gill, and Robert Forest. For more information, please visit http://smithgill.com

ABOUT CHICAGO SHAKESPEARE THEATER
A global theatrical force, Chicago Shakespeare Theater (CST) is known for vibrant productions that reflect Shakespeare’s genius for storytelling, musicality of language, and empathy for the human condition. Under the leadership of Artistic Director Barbara Gaines and Executive Director Criss Henderson, Chicago Shakespeare has redefined what a great American Shakespeare theater can be, putting forward a company that delights in the unexpected and defies theatrical category. A Regional Tony Award-winning theater, CST produces acclaimed plays at its home on Navy Pier, throughout Chicago’s schools and neighborhoods, and on stages around the world. In 2017, the Theater unveils a radical new stage, The Yard at Chicago Shakespeare. Together with the Jentes Family Courtyard Theater and the Thoma Theater Upstairs at Chicago Shakespeare, The Yard positions CST as the city’s largest and most versatile performing arts venue. For more on CST, please visit https://www.chicagoshakes.com