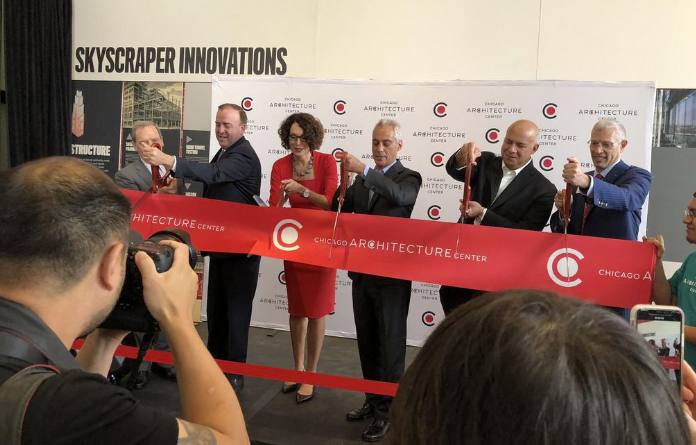 A project that took a decade to realize, the new 20,000-square-foot Chicago Architecture Center at 111 E. Wacker Dr. is literally just footsteps from where the city was founded on the banks of the Chicago River.

The new center overlooks a city now densely populated with skyscrapers that are rightfully given their due in exhibits at the architecture center designed by the firm of Adrian Smith + Gordon Gill Architecture.

In immediate view through soaring windows are several of the city’s most distinctive structures, including Tribune Tower, the Wrigley Building, and on a more modern note, a new glass-enclosed Apple Store.

Emanuel, in his ribbon-cutting remarks, briefly talked of Chicago's world-renowned architecture as the “family jewels,” before launching into a campaign spiel about forces tearing us apart and his hope for humanity coming together. He even mentioned he had just heard about city school children’s improved test scores.

The Chicago Architecture Center, of course, is now something Emanuel can point to as another attraction he helped realize as he faces a brutal fight to get re-elected for a third term.

Certainly anyone with an interest in how stunning architecture can lend character to a city will find much of value in the new architecture center.

But without question, the centerpiece is what’s billed as the "Chicago Model Experience,” sponsored by DSM Additive Manufacturing.

An impressive 3-D model of the city includes more than 4,000 buildings. Various parts of the model are spotlighted as an accompanying video succinctly recounts the history of Chicago from a distinctly architectural perspective.

It’s a beautifully-rendered exhibit. But it's sure to bring a tear to the eye of longtime Chicago residents as the video talks of the city’s rapid growth in the early years and the excitement and optimism that accompanied a Chicago on the rise. The Chicago of today, of course, is notable for being the only major metropolis to be losing population as it confronts crushing debt, crime and other crippling issues.

The new center is not exclusively Chicago-centric. There are detailed models of major skyscrapers from around the world, including the Chrysler Building in New York City, the Petronas Towers in Kuala Lumpur, Malaysia and the Jeddah Tower in Jeddah, Saudi Arabia.

There’s also an expansive gift shop which is likely to generate a nice chunk of revenue.

The center is just across the street from the docks where the the famous architecture rivers tours operate. These tours are routinely singled out as one of the city’s most popular tourist attractions.

Having the new architecture center nearby will ensure the new outpost gets plenty of visitors, too.