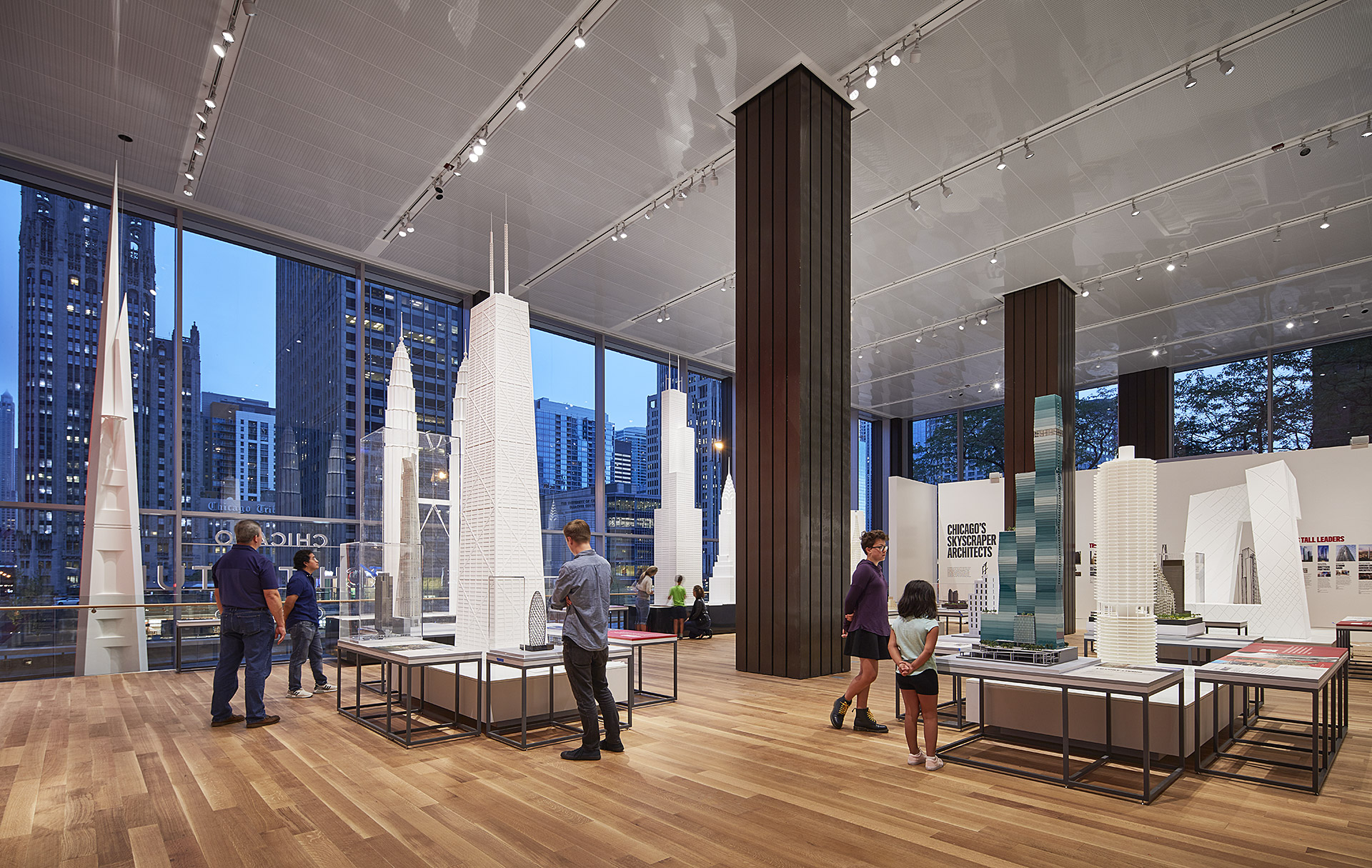 There is also the dramatically expanded Chicago Model, an expanse of mini skyscrapers and other buildings that offers a helicopterlike overview of the city’s sprawling downtown. The model has grown from 1,300 buildings to more than 4,200, and features a light show that paints sections of the model in different colors, including red-orange for the raging Chicago Fire.

You couldn’t indulge in visual spectacle like that in the center’s old home, the atrium lobby of 224 S. Michigan Ave. But in its privately funded, $12 million new place at 111 E. Wacker Drive., which opens Friday, all sorts of tricks are possible and happily, they’re not cheap tricks. They serve the nonprofit foundation’s essential mission: Raising the city’s collective design IQ.

Founded in 1966 to save Glessner House, the Richardsonian Romanesque masterpiece on Prairie Avenue, the center now offers 85 architecture tours, including its Chicago River cruise, whose docks are right below its new home. It also hosts lectures, exhibitions, education programs and the Open House Chicago interior tours, drawing an estimated 688,000 people a year, according to CEO Lynn Osmond. Its new home is projected to raise total annual attendance to 932,000.

A preview Tuesday indicated the center may be able to hit the sweet spot of being as welcoming to the skyscraper geek as to the tourist who doesn’t know Burnham and Sullivan. That matters because the center, whose old home was free, is now charging nonmembers a $12 admission fee (Being on one of its tours will get you a discount or free admission).

The experience begins on the sidewalk outside 111 E. Wacker, a so-so 1970 steel-and-glass office building designed by the Office of Mies van der Rohe. While the two-level, 20,000-square-foot center sits directly across the river from the bracingly transparent Michigan Avenue Apple store, it’s just far enough away from Michigan Avenue that crowds may miss it. How to hook them? Skyscraper showmanship.

Right there in the 40-foot-high expanse of glass that lines the center’s front are scale models of five path-breaking high-rises: Chicago’s Home Insurance Building, often called the first skyscraper, which was demolished in 1931; New York’s dazzling Chrysler Building; Chicago’s muscular Willis (originally Sears) Tower; Malaysia’s Petronas Towers, which snatched the tallest title from Sears; and the future World No. 1, Saudi Arabia’s under-construction Jeddah Tower, which will rise more than one kilometer, or 3,281 feet. The 38-foot Jeddah Tower is twice as tall as the Willis model without its antennas.

Fortuitously, the glass wall through which the models are seen reflects the images of the Tribune Tower, the Wrigley Building and other skyscrapers across the river. Those reflections intermingle with the models, a neat mix of the real and the representational.

The international character of the models sends a clear message: Chicago is a global skyscraper epicenter, a city that exports that expertise. The Jeddah Tower was designed by Chicago-based Adrian Smith + Gordon Gill Architecture. That firm also designed the center.

The expansive space you encounter inside results in part from a skillful revamp by Chicago architects Goettsch Partners of 111 E. Wacker’s formerly forbidding base. The Goettsch firm extended a wall of glass over the building’s raised outdoor plaza, transforming it into usable indoor space. In turn, Smith-Gill sliced out the edge of the waffle-shaped concrete slab between 111’s first and second floors, creating a perimeter zone that’s a dramatic 40 feet tall.

The first floor, which includes a gift shop and an orientation area for docent-led tours, is centered on the Chicago Gallery, whose exhibits tell the story of how Chicago became a locus of architectural innovation. There are welcome nods to the diversity of the city’s neighborhoods and their characteristic building types (two-flats, bungalows and the like), but the highlight is the enlarged and improved Chicago Model.

The model comes complete with an eight-minute video of Chicago’s architectural high points that’s a bit boosterish, but will still be informative for newbies. The model’s jazzy light show even displays things like the city’s bike paths. Such features could make it a useful, big-picture tool for urban planners, not just a thing that wows tourists.

Upstairs, in the Drake Family Skyscraper Gallery, is the aforementioned row of skyscrapers, which are part of an exhibit called “Building Tall.” The exhibit includes thematic areas that display other large-scale models, among them Skidmore, Owings & Merrill’s John Hancock Center and Rem Koolhaas’ looplike CCTV Tower in Beijing. Small models, some on loan, display famous skyscrapers from around the world and such curiosities as proposed but never built  Chicago skyscrapers like the Miglin-Beitler tower.

The gallery, conceived in cooperation with the Chicago-based Council on Tall Buildings and Urban Habitat, is spectacular, educational and a bit misleading. It could lead an unsuspecting tourist to think that architecture is only about making eye-grabbing shapes.

An adjoining temporary exhibition gallery, which currently features an ecology tinged show that asks visitors to ponder what sort of city they’ll inhabit in 2050, tempers that icon-centric focus. Good cities, it reminds us, do more than pile up sexy, stand-alone objects.

Throughout, graphics developed by the center in partnership with the museum planning and design firm Gallagher & Associates, are bold. Short text blocks won’t put visitors to sleep.

If there’s a fault, it’s that the center doesn’t include other architectural organizations, such as the American Institute of Architects’ Chicago chapter, under its roof. Such a cross-fertilizing arrangement was a goal when the foundation announced years ago that it might build a new home. But downtown Chicago is compact enough — and the new center is attractive enough — that members of the the city’s architecture community are still likely to cross paths here.

The center effectively sums up a lot of trends bubbling in Chicago right now — the transformation of the riverfront into a post-industrial amenity, the exhibition culture promoted by the Chicago Architecture Biennial, and the current building boom’s reach for the sky.