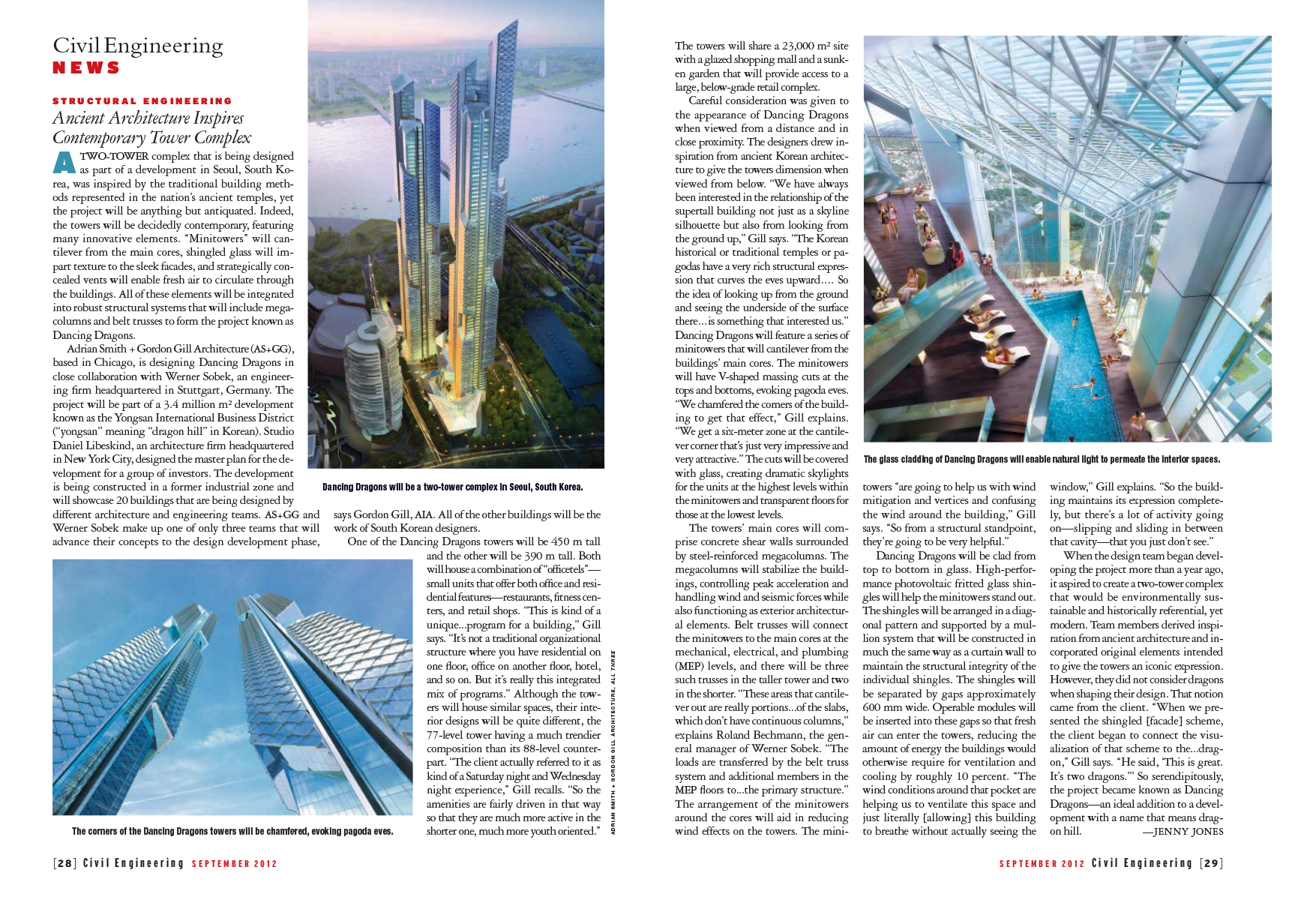 A Two tower complex that is being designed as part of a development in Seoul, South Korea, was inspired by the traditional building methods  represented in the nation’s ancient temples, yet the project will be anything but antiquated. Indeed, the towers will be decidedly contemporary, featuring many innovative elements. “Minitowers” will cantilever from the main cores, shingled glass will impart texture to the sleek facades, and strategically concealed vents will enable fresh air to circulate through the buildings. All of these elements will be integrated into robust structural systems that will include megacolumns and belt trusses to form the project known as Dancing Dragons.

Adrian Smith + Gordon Gill Architecture (AS+GG), based in Chicago, is designing Dancing Dragons in close collaboration with Werner Sobek, an engineering firm headquartered in Stuttgart, Germany. The project will be part of a 3.4 million m² development known as the Yongsan International Business District (“yongsan” meaning “dragon hill” in Korean). Studio Daniel Libeskind, an architecture firm headquartered in New York City, designed the master plan for the development for a group of investors. The development is being constructed in a former industrial zone and will showcase 20 buildings that are being designed by different architecture and engineering teams. AS+GG and Werner Sobek make up one of only three teams that will advance their concepts to the design development phase, says Gordon Gill, AIA. All of the other buildings will be the work of South Korean designers.

One of the Dancing Dragons towers will be 450 m tall and the other will be 390 m tall. Both will house a combination of “officetels”— small units that offer both office and residential features—restaurants, fitness centers, and retail shops. “This is kind of a unique...program for a building,” Gill says. “It’s not a traditional organizational structure where you have residential on one floor, office on another floor, hotel, and so on. But it’s really this integrated mix of programs.” Although the towers will house similar spaces, their interior designs will be quite different, the 77-level tower having a much trendier composition than its 88-level counterpart. “The client actually referred to it as kind of a Saturday night and Wednesday night experience,” Gill recalls. “So the amenities are fairly driven in that way so that they are much more active in the shorter one, much more youth oriented.” The towers will share a 23,000 sm  site with a glazed shopping mall and a sunken garden that will provide access to a large, below-grade retail complex.

Careful consideration was given to the appearance of Dancing Dragons when viewed from a distance and in close proximity. The designers drew inspiration from ancient Korean architecture to give the towers dimension when viewed from below. “We have always been interested in the relationship of the supertall building not just as a skyline silhouette but also from looking from the ground up,” Gill says. “The Korean historical or traditional temples or pagodas have a very rich structural expression that curves the eves upward.... So the idea of looking up from the ground and seeing the underside of the surface there...is something that interested us.” Dancing Dragons will feature a series of minitowers that will cantilever from the buildings’ main cores. The minitowers will have V-shaped massing cuts at the tops and bottoms, evoking pagoda eves. “We chamfered the corners of the building to get that effect,” Gill explains. “We get a six-meter zone at the cantilever corner that’s just very impressive and very attractive.” The cuts will be covered with glass, creating dramatic skylights for the units at the highest levels within the minitowers and transparent floors for those at the lowest levels.

The towers’ main cores will comprise concrete shear walls surrounded by steel-reinforced megacolumns. The megacolumns will stabilize the buildings, controlling peak acceleration and handling wind and seismic forces while also functioning as exterior architectural elements. Belt trusses will connect the minitowers to the main cores at the mechanical, electrical, and plumbing (MEP) levels, and there will be three such trusses in the taller tower and two in the shorter. “These areas that cantilever out are really portions...of the slabs, which don’t have continuous columns,” explains Roland Bechmann, the general manager of Werner Sobek. “The loads are transferred by the belt truss system and additional members in the MEP floors to...the primary structure.” The arrangement of the minitowers around the cores will aid in reducing wind effects on the towers. The mini towers “are going to help us with wind mitigation and vertices and confusing the wind around the building,” Gill says. “So from a structural standpoint, they’re going to be very helpful.”

Dancing Dragons will be clad from top to bottom in glass. High-performance photovoltaic fritted glass shingles will help the minitowers stand out. The shingles will be arranged in a diagonal pattern and supported by a mullion system that will be constructed in much the same way as a curtain wall to maintain the structural integrity of the individual shingles. The shingles will be separated by gaps approximately 600 mm wide. Operable modules will be inserted into these gaps so that fresh air can enter the towers, reducing the amount of energy the buildings would otherwise require for ventilation and cooling by roughly 10 percent. “The wind conditions around that pocket are helping us to ventilate this space and just literally [allowing] this building to breathe without actually seeing the window,” Gill explains. “So the building maintains its expression completely, but there’s a lot of activity going on—slipping and sliding in between that cavity—that you just don’t see.”

When the design team began developing the project more than a year ago, it aspired to create a two-tower complex that would be environmentally sustainable and historically referential, yet modern. Team members derived inspiration from ancient architecture and incorporated original elements intended to give the towers an iconic expression. However, they did not consider dragons when shaping their design. That notion came from the client. “When we presented the shingled [facade] scheme, the client began to connect the visualization of that scheme to the...dragon,” Gill says. “He said, ‘This is  great. It’s two dragons.’” So serendipitously, the project became known as Dancing Dragons—an ideal addition to a development with a name that means dragon hill.