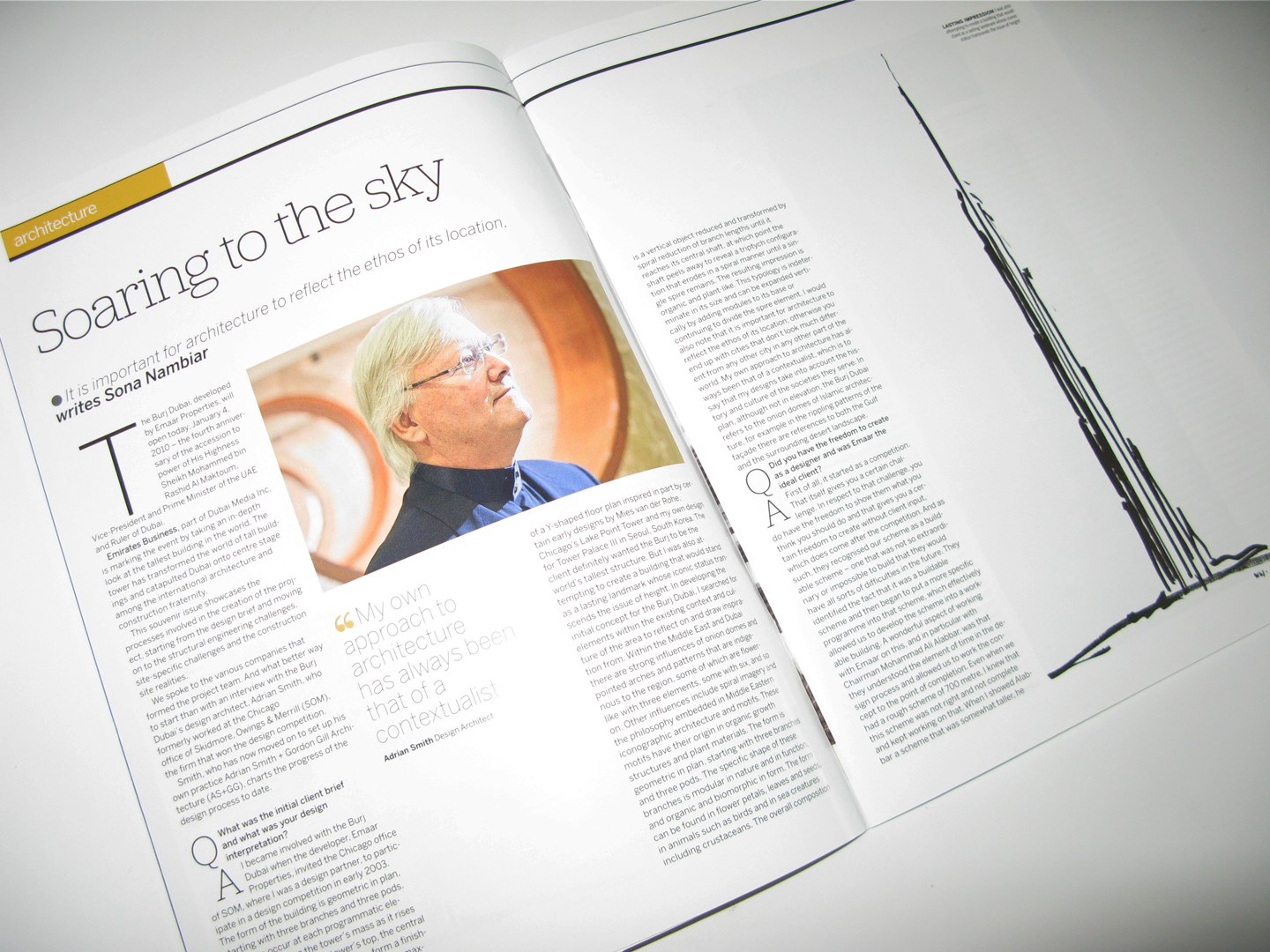 The impossible transformed into reality

The biggest challenge during the building of the Burj Khalifa was to exercise caution, according to Mohamed Alabbar, Chairman of developer Emaar Properties.

"You think of an idea and you get the best brains to get it done," he told Emirates Business. "The biggest challenge then is that you have to fight yourself to be cautious all the time, especially considering the size of the building. It is a global icon and a symbol of the city and you have to be cautious and not take anything for granted."

The world's tallest building was inaugurated yesterday to coincide with the fourth anniversary of Accession Day of His Highness Sheikh Mohammed bin Rashid Al Maktoum, Vice-President and Prime Minister of the UAE, becoming Ruler of Dubai.

"One of the most interesting things about this project is that it pushed all the boundaries of design, construction and engineering and had over 60 consultants from over 100 countries," added Alabbar.

"The Burj Khalifa is a shining example of global collaboration. Every element was a challenge and it pushed the boundaries and also made us cautious about what we did. Another challenge was the skin of the building. We wanted the right colour, the right finish, the right structure, and yet it had to be able to handle wind, earthquake, water and so on. But that is what makes it so beautiful. The top of the Burj is monitored electronically all the time and the building is really resilient," he said.

The project did not need any financing, Alabbar told the media during a briefing yesterday. "When the project was designed and we started construction we sold 90 per cent of the project and hence there was no need for financing since we got the majority of our costs back and also made a profit," he said.

The Burj, which forms the focal point of Emaar's flagship community project, is both the world's tallest building and its highest man-made structure.

"The message is that we build for tens of years to come. Crisis comes and goes and we have been through difficult times. I hope that this is a message for us to move on and this is the beginning of a gradual move forward.

"Look at the real statistics. The flow of people in the city is still strong, tourism is still strong and the hotel occupancy rate is still high. Remember that the crisis hit all cities, but cities move on. All cities are criticised, but Dubai is very self-confident and also the leadership is very confident. I am building all these landmarks to bring a smile to people's face and a better quality of life."

Alabbar said he still regarded Dubai as Emaar's main base.

"Dubai is where our life is and we are still very optimistic and have long-term development plans here as well as in the international cities where we work. The great news that the experience on this project will be a great reference point in the work portfolio of all the members of the project teams, including us," he said.

This point was echoed by Emaar CEO Issam Galadari, who said: &quot;Dubai is a very safe place and the Burj Khalifa is a sign of stability. We have been working with all security and police and made sure that all safety aspects of the project were addressed. During construction, we were not satisfied by the height and changed it.

"This was driven by Sheikh Mohammed, who likes to push all the boundaries. It was his vision to build the tallest building in the world, and in doing so we further improved the quality of the construction of the building," said Galadari, adding: "The reason for the secrecy about the height is that all of us have some secrets. We will look at all our international projects in the coming years when we are actually on the ground. The building has created a lot of value in this development of around 500 acres."

Bill Baker, Partner in charge of Structural and Civil Engineering at Skidmore Owings & Merrill (SOM), the architectural practice that designed the tower, said: "The owner is very fortunate that he sold most of the units a long time ago and it is a famous story of how he sold floors 90 to 108 in two nights many years ago. Emaar also discovered that they were making a lot of money from the buildings that had a view of the Burj Dubai."

Dubai first announced plans to build the Burj Khalifa in January 2004, and six years later the building has become a reality. Up to 12,000 people will live, work and play inside the world's tallest building.

The tower is the focal point of the 500-acre master planned community Downtown Burj Dubai, which is widely described as the most prestigious square kilometre on earth. It pushed the boundaries of design and engineering further than many thought possible and this has been echoed by all the different members of the project team who have spoken to this newspaper.

Excavation work for the tower began soon after that initial announcement, with more than 60 contractors and consultants joining forces on a project of unprecedented scale and ambition. When construction work was at its most intense, more than 12,000 people from over 100 countries were working every day at the Burj Khalifa site. In total, Burj Dubai took 22 million man-hours to build.

Standing at more than 800m (2,625 ft), the construction underground is as fascinating as the tower itself, according to the developer. More than 45,000 cubic m of concrete, weighing more than 110,000 tonnes, make up the tower's steel-reinforced foundations, with 192 piles running to a depth of more than 50 metres.

Work on the Burj's superstructure began in March 2005, with the foundation work alone taking 12 months. The distinctive triple-buttressed outline of the Burj Khalifa was inspired by the desert lily hymenocallis.

Extensive seismic and wind tunnel testing was carried out to perfect the design of the tower. Once the lengthy construction work on the foundations was completed the vertical ascent of the Burj Khalifa was surprisingly fast. The first 100 levels of the tower were completed only 1,093 days after excavation started. A level was added every three days before the uppermost levels were reached. The spire may resemble a needle at ground level, but in reality it is a colossal structure made up of 4,000 tonnes of steel.

"It is six-and-a-half years since we first met with the client and suggested a competition since there were five contenders," said Adrian Smith, the design architect for the building who was with SOM when it won the competition and worked on the project.

"The building was conceived like it was growing out of the ground and I pictured it as spread out at the base of the building instead of a tower just coming down and banging on the ground. The biggest surprise to an architect is one of scale. You are used to seeing it as a model and in drawings. When you see it in real life, it is very surprising. But this is a wonderful experience to have a project built the way you envisioned it. We had a great client and everyone involved was focused on doing their best."

Smith later broke away to set up his own firm, Adrian Smith + Gordon Gill Architecture (AS+GG). But yesterday he told this newspaper: "It is a wonderful feeling - how often does one get to design a building as special as the Burj Khalifa?"

With a total built-up area of around six million sq ft, the Burj Khalifa is set to become a living community in the heart of the city.