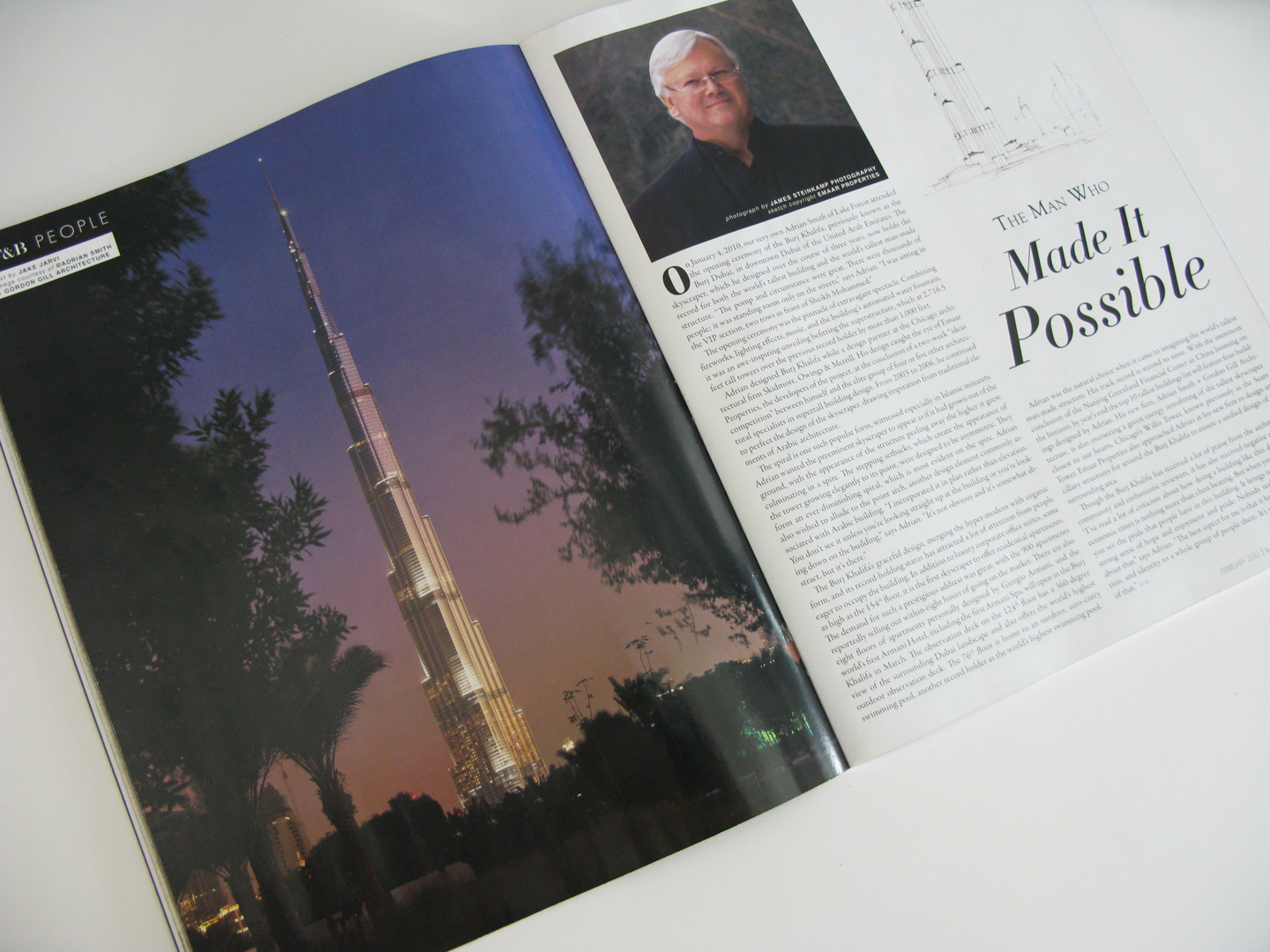 The man who made it possible

On January 4, 2010, our very own Adrian Smith of Lake Forest attended the opening ceremony of the Burj Khalifa, previously known as the Burj Dubai, in downtown Dubai of the United Arab Emirates. The skyscraper, which he designed over the course of three years, now holds the record for both the world's tallest building and the world's tallest man-made structure. "The pomp and circumstance were great. There were thousands of people; it was standing room only on the streets" says Adrian. "I was sitting in the VIP section, two rows in front of Sheikh Mohammed."

The opening ceremony was the pinnacle of extravagant spectacle. Combining fireworks, lighting effects, music, and the building's automated water fountain, it was an awe-inspiring unveiling befitting the superstructure, which at 2,716.5 feet tall towers over the previous record holder by more than 1,000 feet.

Adrian designed Burj Khalifa while a design partner at the Chicago architectural firm Skidmore, Owings & Merrill. His design caught the eye of Emaar Properties, the developers of the project, at the conclusion of a two-week "ideas competition" between himself and the elite group of four five other architectural specialists in supertall building design. From 2003 to 2006, he continued to perfect the design of the skyscraper, drawing inspiration from traditional elements of Arabic architecture.

The spiral is one such popular form, witnessed especially in Islamic minarets. Adrian wanted the preeminent skyscraper to appear as if it had grown out of the ground, with the appearance of the structure peeling away the higher it grew, culminating in a spire. The stepping setbacks, which create the appearance of the tower growing elegantly to its point, were designed to be asymmetric. They form an ever-diminishing spiral, which is most evident on the spire. Adrian also wished to allude to the point arch, another design element commonly associated with Arabic building. "I incorporated it in plan rather than elevation. You don't see it unless you're looking straight up at the building or you're looking down on the building" says Adrian. "It's not obvious and it's somewhat abstract, but it's there."

The Burj Khalifa's graceful design, merging the hyper-modern with organic form, and its record-holding status has attracted a lot of attention from people eager to occupy the building. In addition to luxury corporate office suites, some as high as the 154th floor, it is the first skyscraper to offer residential apartments. The demand for such a prestigious address was great, with the 900 apartments reportedly selling out within eight hours of going on the market. There are also eight floors of apartments personally designed by Giorgio Armani, and the world's first Armani Hotel, including the first Armani Spa, will open in the Burj Khalifa in March. The observation deck on the 124'h floor has a 360-degree view of the surrounding Dubai landscape and also offers the world's highest outdoor observation deck. The 76'h floor is home to an outdoor, zero-entry swimming pool, another record holder as the world's highest swimming pool.

Adrian was the natural choice when it came to imagining the world's tallest man-made structure. His track record is second to none. With the imminent conclusion of the Nanjing Greenland Financial Center in China looming on the horizon, by year's end the top 10 tallest buildings list will feature four buildings designed by Adrian. His new firm, Adrian Smith + Gordon Gill Architecture, is also overseeing a green energy retrofitting of the tallest skyscraper closest to our hearts, Chicago's Willis Tower, known previously as the Sears Tower. Emaar Properties also approached Adrian at his new firm to design ancillary structures for around the Burj Khalifa to ensure a unified design of the surrounding area.

Though the Burj Khalifa has received a lot of praise from the architectural community and enthusiastic reviewers, it has also received negative attention. "I've read a lot of criticism about how doing a building like this during these economic times is nothing more than chest beating. But when you're in Dubai, you see the pride that people have in this building. It brings to that culture a strong sense of hope and enjoyment and pride. Nobody really says anything about that" says Adrian. "The best aspect for me is that it has given joy, inspiration, and identity to a whole group of people there. It's very nice to be a part of that."