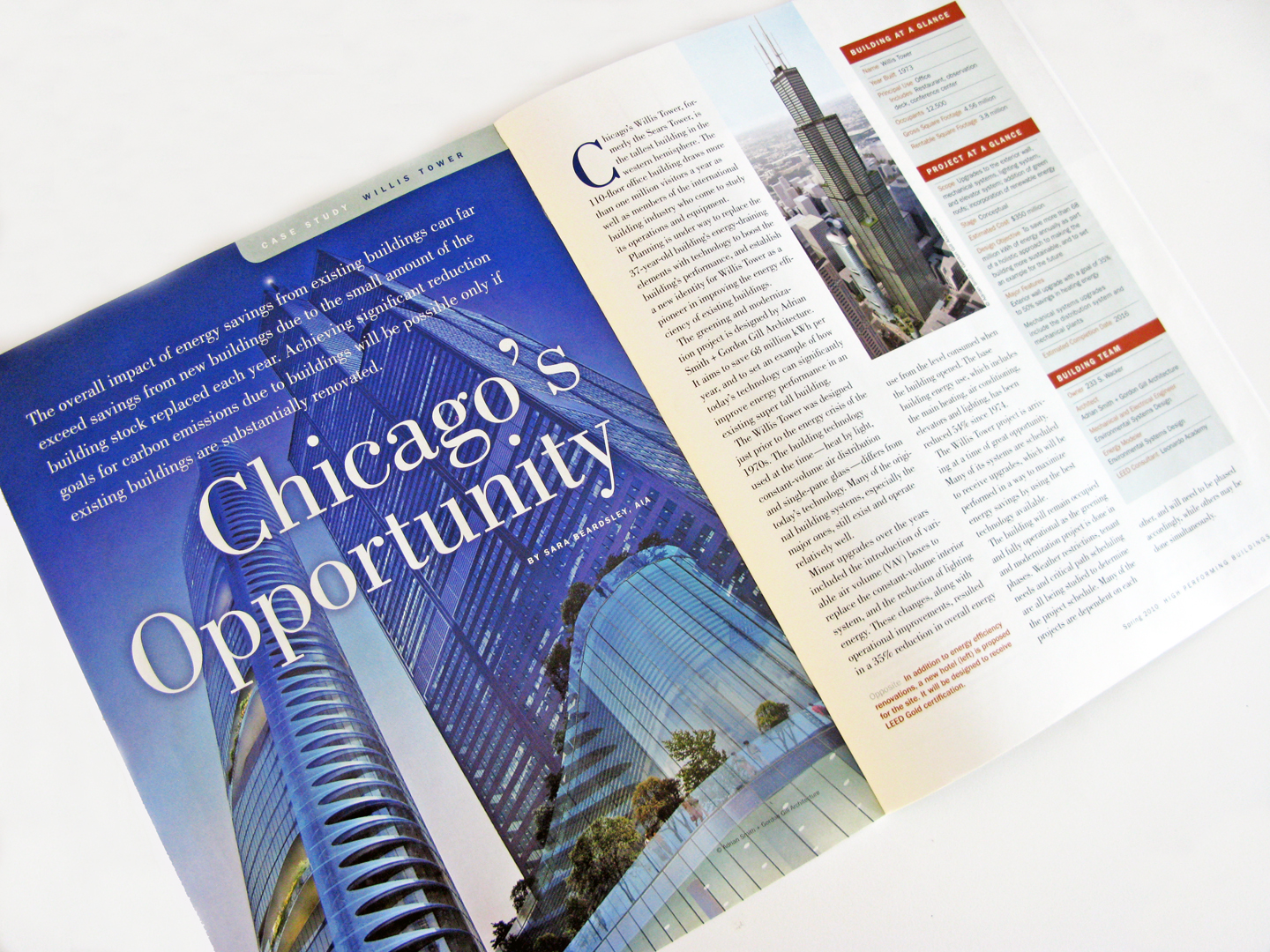 Chicago's Willis Tower, formerly the Sears Tower, is the tallest building in the western hemisphere. The 110-floor office building draws more than one million visitors a year as well as members of the international building industry who come to study its operations and equipment.

Planning is under way to replace the 37-year-old building's energy-draining elements with technology to boost the building's performance, and establish a new identity for Willis Tower as a pioneer in improving the energy efficiency of existing buildings.

The greening and modernization project is designed by Adrian Smith + Gordon Gill Architecture. It aims to save 68 million kWh per year, and to set an example of how today's technology can significantly improve energy performance in an existing super tall building.

The Willis Tower was designed just prior to the energy crisis of the 1970s. The building technology used at the time- heat by light, constant-volume air distribution and single-pane glass -differs from today's technology. Many of the original building systems, especially the major ones, still exist and operate relatively well.

Minor upgrades over the years included the introduction of variable air volume (VAV) boxes to replace the constant-volume interior system, and the reduction of lighting energy. These changes, along with operational improvements, resulted in a 35% reduction in overall energy use from the level consumed when the building opened. The base building energy use, which includes the main heating, air conditioning, elevators and lighting, has been reduced 54% since 1974.

The Willis Tower project is arriving at a time of great opportunity. Many of its systems are scheduled to receive upgrades, which will be performed in a way to maximize energy savings by using the best technology available.

The building will remain occupied and fully operational as the greening and modernization project is done in phases. Weather restrictions, tenant needs and critical path scheduling are all being studied to determine the project schedule. Many of the projects are dependent on each other, and will need to be phased accordingly, while others may be done simultaneously.

Building Envelope, Mechanical Systems
The first major project is an upgrade to the building envelope. Studies have determined that upgrading the curtain wall system will produce substantial energy savings, which will allow for more flexibility and smaller equipment sizing in the design of the perimeter mechanical distribution and the mechanical plant upgrades.

Therefore, it makes sense to upgrade the envelope first, with mechanical upgrades designed in concert with the better performing facade.

The current facade system is approximately 60% glass and 40% anodized aluminum panels. The original glazing of the tower's 16,000 windows is single-pane with a bronze tint.

Design options for the exterior wall upgrade range from glass replacement with insulated units to a full facade upgrade including triple-paned glass and the introduction of a thermal break. Glass replacement is the simplest option, but does not solve the problem of hot and cold air transfer through the mullions around the glass or through the non-glazed areas.

If only glass was replaced, perimeter heating would still be needed. A full facade upgrade to the performance level of today's systems would reduce air infiltration and improve thermal comfort to a level that the perimeter heating at floor level could possibly be removed.

Studies have shown that the savings in heating energy for a full curtain wall upgrade would be almost double the savings that could be achieved by glass replacement alone. As the design progresses, the team is working to integrate various options for the mechanical distribution system with options for the exterior envelope design; the goal is to find the most overall efficient solution with no noticeable difference to the facade appearance.

The modernization project also includes major upgrades to the building's mechanical plants, including chillers and hot water generators. The major building systems at Willis Tower are currently run by electricity. This includes electric hot water generators, which produce the main hot water for the heating system.

As part of the renovation project, we are studying the possibility of introducing gas-fired boilers. The use of fuel cell cogeneration technology to simultaneously generate electricity and hot or chilled water (using absorption chillers) is also part of the planned project. In a building as large as Willis Tower, on-site energy generation has the potential to save millions of tons of carbon by avoiding the losses that would be accrued in obtaining conventional electric power from a coal or gas-fired plant.

All of the new plant and distribution equipment will use the latest technology and be properly sized for the best possible energy performance. Much of the fan and pump energy used for the large perimeter induction unit system will no longer be needed, allowing for additional savings. In the end, the project team aims to convert Willis Tower's large mid-century mechanical system to one that is efficiently designed to the latest standards.

Lighting and Elevators
The project has a savings goal of 50% of electrical energy from lighting, elevators and escalators. Much of the savings in lighting energy will be achieved by introducing advanced lighting controls through digital ballasts. This will automatically optimize the lighting based on occupancy and available daylight and ensure more efficient control of zones.

The same concepts of automatic control and turning off unneeded equipment will be used in the elevator system. The current system offers excellent wait times and service, but the equipment still uses 1970s-era signalization and motor generators, which must run continuously to operate the elevator cars.

A retrofit with digital drives and controls will reduce the elevators' energy consumption by 40% to 50% by allowing elevator cars to stand by when not in use. Project members are also studying the use of destination dispatch control as a way to upgrade service and streamline operations. The retrofit also includes more efficient drives in the building's 15 escalators that will consume less energy, or shut down when not in use.

Renewable Energy
Due to the size and verticality of Willis Tower, as well as the local climate, the potential for green roofs and renewable energy is limited. However, the project's goal is to use all available technologies to some extent.

Renewable energy applications also serve as an educational tool, showing how these technologies can be applied to an existing super tall building. Willis Tower receives more than one million visitors every year, many of them children, so visible renewable technologies could serve as an example to increase public awareness.

Proposed technologies include solar hot water panels on the 90thfloor south-facing roof; photovoltaic panels on the south facade; test wind turbines on some of the highest roofs; and green roofs on all available areas not covered by solar panels. These elements will be visible from sky lobbies and from the Skydeck on the 103rd floor.

Conservation Philosophy
Willis Tower has already started a water saving program. By retrofitting plumbing fixtures with aerators and flush valves, water use has been reduced by 20%. Once restroom modernization is complete, the overall goal is to reduce water use by 40%, or 24 million gallons annually.

Even small measures are multiplied over millions of square feet and thousands of occupants, making an impact comparable in size to an entire neighborhood.

Making the Case for Facade Renovations
Facade upgrades represent one of the greatest potential energy Improvements for building renovation and modernization projects. However, cost is often a barrier to such upgrades and is hard to justify when it Is based on a simple payback equation. But the benefits can outweigh the costs If the potential savings, Incentives and increased revenue are considered as part of the payback equation.

Many mid-century high-rise urban buildings in the United States will soon require major renovation. These post-World War II , pre-oil embargo buildings represent the majority of the square footage of office space in many cities due to the economic growth that occurred during that time.

However, these buildings are often some of the largest energy consumers per square foot due to the technology and construction practices used at the time. Some mid-century buildings perform relatively well. But generally, they have lower-performing facade systems.

Lighting, elevators and mechanical systems typically are considered first when evaluating potential energy savings for these buildings. These upgrades usually offer a 10- to 20-year simple payback period. Retrocommissioning and fixture upgrades offer even shorter paybacks. In this new era of energy awareness, as each building makes its list of potential improvements, facade upgrades are seldom near the top of that list.

If the building enclosure is so important, then why is it so often neglected in major renovation projects? The simple answer is cost. Changing glazing or adding a new facade to a building can cost up to $25/ gross ft2, which is a high premium for any existing building. Using a simple payback calculation based on capital cost, such an investment is difficult to justify.

But many other factors can significantly affect the equation. For example, most building systems reach the end of their life, requiring replacement or major modernization, at about 40 to 50 years. The goal in these replacements is to use the most advanced designs to save energy. Most mid-century buildings, especially in northern climates, have building envelopes with much lower performance than one would design today. During a modernization, designers often are forced to design new oversized building systems against an outdated, underperforming facade.

Improving the facade of a typical midcentury building prior to mechanical modernization allows for variations in design of the system and reduces perimeter heating elements (used to offset air infiltration through the facade glass). The size of the plant equipment associated with the mechanical system also could be reduced by as much as half from its original design. The annual maintenance cost of keeping the larger mechanical system running smoothly also could be reduced.

Leasing rates, occupant thermal comfort, future energy costs and energy-related tax benefits also affect the payback equation. Building characteristics must be evaluated as well, such as the synergies with mechanical systems and lighting, feasibility concerns such as structural capacity, wind and blast performance, and historical concerns for certain buildings. But the potential benefits can outweigh the costs.