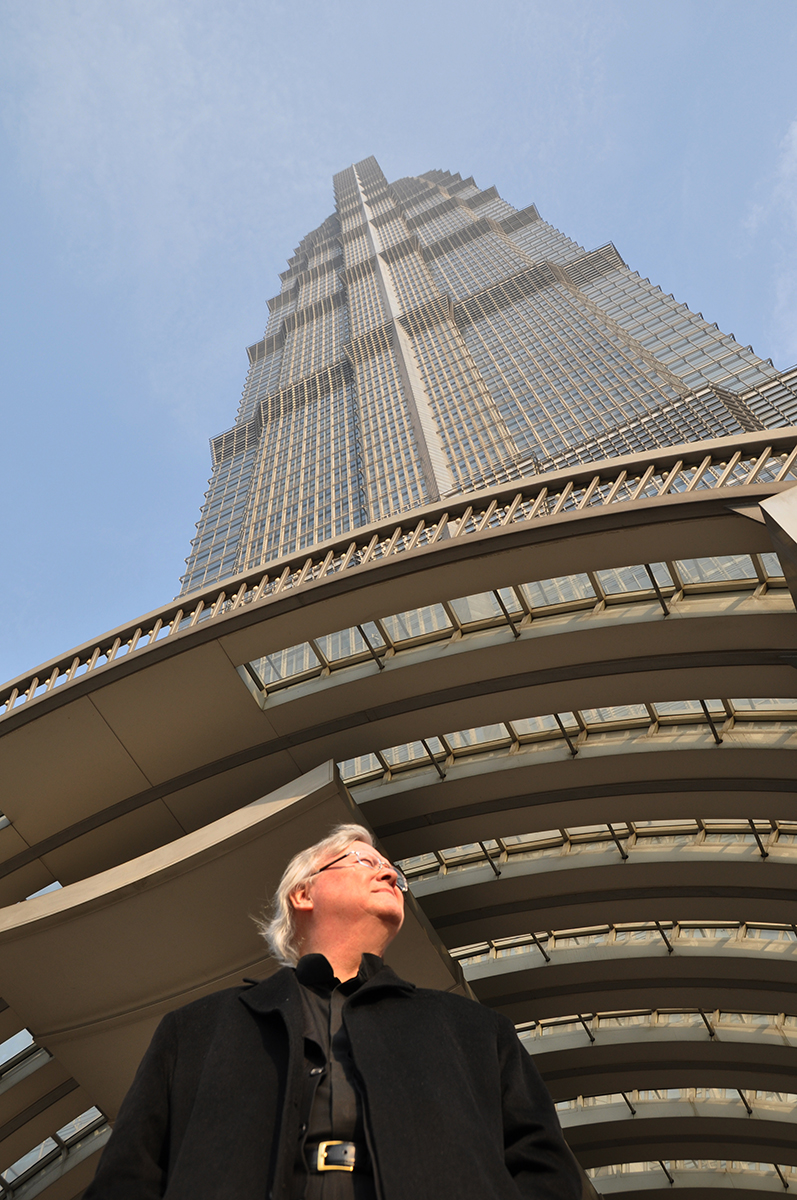 CHICAGO, November 2, 2016 – As Shanghai’s Jin Mao Tower approaches its 20th anniversary, Adrian D. Smith, Design Partner for the project at SOM in Chicago, reflects on the legacy of China’s – and his own – first supertall tower. Jin Mao Tower’s recent accomplishments and designations support the building’s reputation as one of the most treasured buildings in China.

“In March 1993, we were visited at SOM (Skidmore, Owings & Merrill) in Chicago by the client so that they could introduce the project competition to us and ask us if we had any questions,” says Smith, currently Design Partner of Adrian Smith + Gordon Gill Architecture. “I asked why they wanted an 88-story building. Why not two buildings on the site, say a 50-story office and a 38-story hotel, instead of a tall mixed-use building? After all, it would be less expensive and faster to construct.”

The question may sound odd coming from the current leading expert on supertall towers, but in 1993 Smith had yet to design a supertall tower, which is defined as being a building over 300 meters tall.

The client’s reasoning spoke to Smith: “I had long been interested in the cultural aspects of an architectural site,” says Smith. “My design philosophy, Global Contextualism, explores the use of vernacular and indigenous forms, integrating new buildings into a regional context.”

Smith also adds, “Once we learned the importance of the number eight, it became intriguing to weave elements of it into the design. It was never a restriction because we didn’t let it govern any design decisions. The elements of the building that worked best in conjunction with eight came very naturally, such as the octagonal core, the eight main super-frame columns, and the eight-sided exterior at the top.”

The client also expressed an alternate reason for the 88-story project. In 1988, Chinese statesman Deng Xiaoping stood on the Jin Mao Tower site in the Pudong District – when he was 88 years old – and declared it to be the location of the future of Chinese business and commerce. Compared with the density of the Pudong District of 2016, it is hard to imagine the landscape as it was in the late 1980s and early 1990s: no tall buildings, with industrial shipyards and wharfs dominating the landscape.

Knowing that the building would be the central focal point of the new Pudong District, Smith says, “I wanted to design an iconic landmark tower created specifically for the site; for China – a building that could only be in China, so I designed it to be evocative of a traditional pagoda,” says Smith. “But I reinterpreted it with contemporary technology and building materials including aluminum and stainless steel cladding. No actual pagoda ever looked anything like Jin Mao.”

Topped in August 1998, Jin Mao Tower has received numerous awards and recognitions since its inception. In 2013, Jin Mao became the tallest and longest-operating building in China to receive a LEED-EB: OM (Existing Buildings: Operations + Management) Gold certification. Jin Mao’s top conservation strategies have included reusing or recycling 70% of all durable goods and the diversion of 70% of the waste accumulated from facility alterations and additions.

Partially due to this certification, in 2014, Jin Mao Tower was the finalist for the CTBUH Performance Award. The building maintains its commitment to ongoing key performance indicators through energy-consumption analysis meetings, which are held each month by building facility managers to clarify energy expenditures of water, electricity, and natural gas. By comparing annual and monthly consumption statistics with the building’s automation system’s daily control log, they decide where energy-saving strategies should be implemented.

Most recently, in 2016, Jin Mao Tower was honored as one of the 98 architectural masterpieces in China that was designated a National Heritage site. This heritage designation list was the first to include 20th-Century architecture. Additionally, Jin Mao Tower received the 2016 CITAB-CTBUH China Tall Building Legacy Award, which recognizes the proven value and performance of buildings over 10 years old.

Jin Mao Tower has also become deeply rooted in Shanghai’s pop culture. It is a well-known site for adrenaline fanatics who have done everything from climb the tower with no ropes to BASE jump with several people at a time. In an effort to help the public experience the dazzling building, on July 28, 2016 Jin Mao Tower opened an official skywalk along the outside of the 88th floor. It is the highest exterior, fenceless, transparent walkway on a high-rise building in the world, rising 340 meters above the ground.

“The tower speaks to Shanghai and the whole of China,” says Smith. “Many buildings are relatively forgotten about after they have reached several years old. But Jin Mao’s legacy is going strong. It’s one of my favorite completed projects and I’m proud to see it getting the recognition that it deserves.”

About Adrian D. Smith FAIA, RIBA, HON D.LITT
Adrian Smith, FAIA, RIBA, HON D.LITT, is an Architect of international renown, having designed many landmark buildings including the two world’s tallest structures – Burj Khalifa completed in 2010 in Dubai, and Jeddah Tower, now under construction in Jeddah, Saudi Arabia. In 2006, he founded Adrian Smith + Gordon Gill Architecture (AS+GG), a firm dedicated to the design of high-performance, energy-efficient and sustainable architecture on an international scale. Prior to AS+GG, he was a Design Partner in the Chicago office of Skidmore, Owings & Merrill LLP, from 1980 to 2003 and a Consulting Design Partner from 2003 to 2006. His work embraces the principle of “On Site” power generation using the building’s design to harvest power from the sun, wind, and geothermal conditions in order to reduce the buildings reliance on the local infrastructure. In many instances, this has had a dramatic impact on the expression of the Architecture and has added an important influence to his philosophy of Global Contextualism.

About Jin Mao Tower
Jin Mao Tower is a 280,000 sm mixed-use building in Shanghai, China. It houses a 555-room Grand Hyatt Hotel in the top 38 stories with impressive views of the city and the surrounding region. Office floors are in the lower 50 stories. Jin Mao’s six-story podium has hotel function areas, a conference and exhibition center, a cinema auditorium, and a 21,000 sm retail galleria. The base of the tower is surrounded by a landscaped plaza with a reflecting pool and seating, offering visitors a peaceful retreat from Shanghai’s busy street activity.