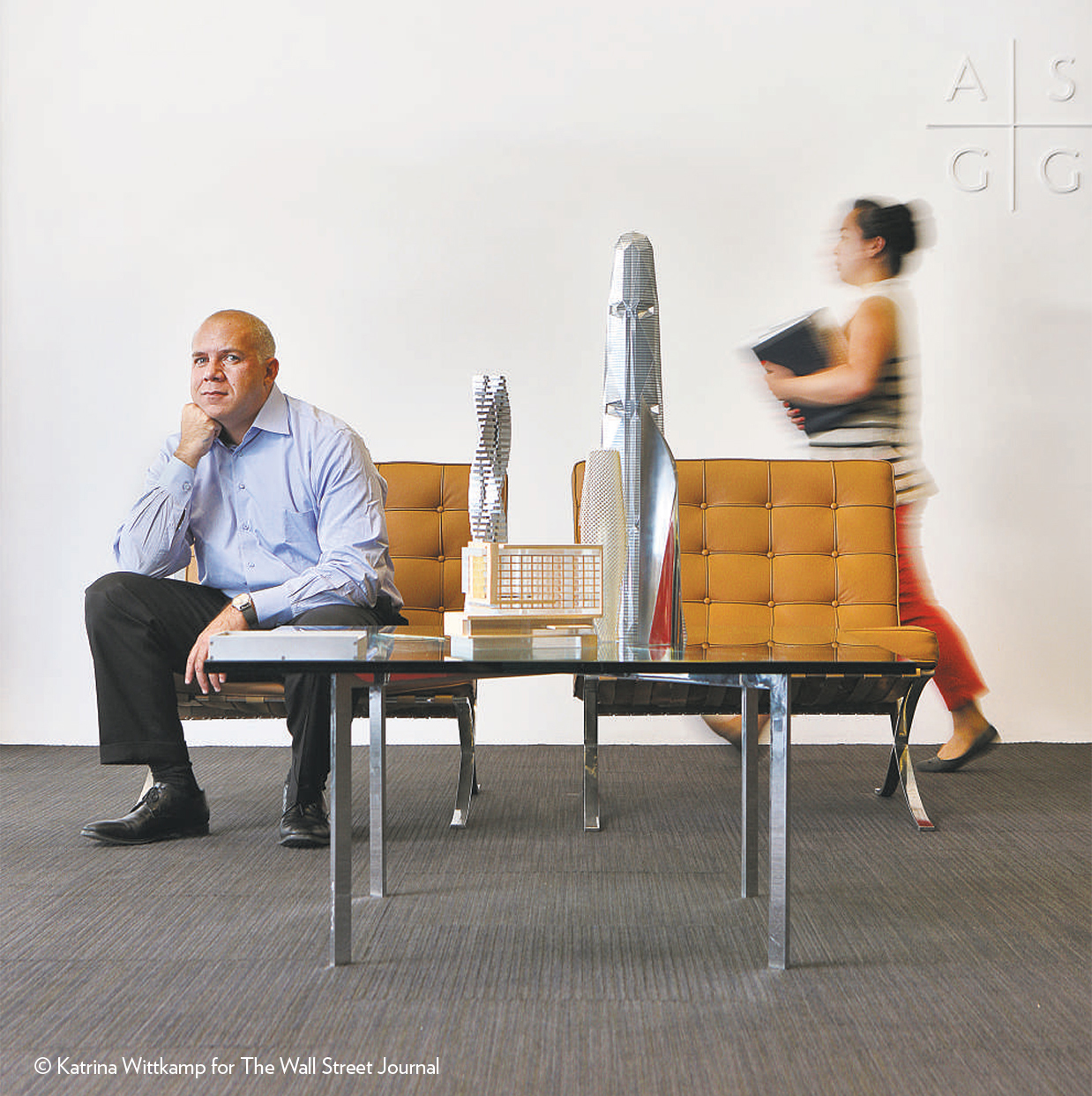 Designing Towers to Catch the Sky

Gordon Gill, an architect in Chicago who specializes in very tall, energy-efficient structures, doesn't spend much time looking at buildings.

Mr. Gill said that he gets better ideas by looking at lakes or trees rather than Chicago's broad-shouldered skyline. The city's notorious blasts of wind are another inspiration. After watching his wife struggle across a plaza in a winter gale one morning, he recalled pondering how the shape of the nearby buildings swirled the air currents. "If you could harness and use that," he said, "wouldn't that be great?"

The 49-year-old architect aims to do that with the 72-story Pearl River Tower, due to open within a few months in Guangzhou, China. The building's wind turbines and solar cells are expected to meet a large share of its energy needs.
Mr. Gill's passion for nature has helped to make him a star in his profession at a time when companies erecting headquarters feel compelled to prove their devotion to preserving or enhancing the environment. His Chicago-based firm Adrian Smith + Gordon Gill, founded six years ago, is working on trophy assignments in the U.S., Asia and the Middle East. Its biggest project is the planned $1.2 billion Kingdom Tower in Jeddah, Saudi Arabia. At nearly two-thirds of a mile high, that building is expected to be the world's tallest, surpassing Dubai's Burj Khalifa, designed by Mr. Smith when he was at another firm, Skidmore, Owings & Merrill.

Mr. Gill also gets involved in smaller-scale projects, such as a theater in Chicago that he hopes to help expand and renovate. While flying back to Chicago from Toronto recently, he got some ideas for how to improve the entrance. Because he didn't have a notebook handy, Mr. Gill sketched his ideas with a soft pencil on an Air Canada airsickness bag.

Normally, he scribbles his ideas into black bound Daler-Rowney notebooks, costing $7.50 each. At a construction site in China, however, he once illustrated a concept for a client by stacking up a few bricks and scratching lines in the mud. Ideas need to be seized whenever they erupt, he said.

"You can't say, 'OK, it's time to design,' " Mr. Gill said. "You've just got to let it flow." He finds that he works best when he is juggling several projects rather than concentrating full-time on one. "I'd rather have 10 problems in a day than one," he said. Too much focus on one thing can lead to dead ends: "You may be asking the same question over and over, but the question itself may be wrong."

Mr. Gill came up with the shape of the Pearl River building early one Saturday morning while sitting in the living room of his family's apartment, which had a panoramic view of Lake Michigan. He had two ideas for its shape: a catcher's mitt or a sail, designed to catch wind from many angles; and an elliptical form that would keep the sun from striking the entire facade at any one time, preventing overheating. When he mashed together the two shapes, he came up with his basic form, which resembles a plush, upholstered car seat.

For a proposed 40-story hotel and office building in Nashville, Tenn., Mr. Gill and his colleagues wanted to maximize the ability of the south facade and roof to catch sunlight on solar panels. The drawings call for a building whose base is a typical rectangle. But the building will twist as it rises from the ground, turning its south face toward the sunlight and tilting the roof to capture more rays. Mr. Gill likens it to a houseplant growing toward a window.

Such designs may sound whimsical, but they need to be tested scientifically. For a tower in Wuhan, China, Mr. Gill's colleagues used a computer model to run 32,196 iterations of possible shapes to find the best one for energy use, wind control and views.

Mr. Gill has other radical ideas in mind. One involves connecting a building's mechanical, electrical and plumbing systems via tubes to office furniture, so that occupants could tweak the cooling, heating or ventilation at their individual workspaces. "I can't say any more about it because I don't want to give too much away," he said.