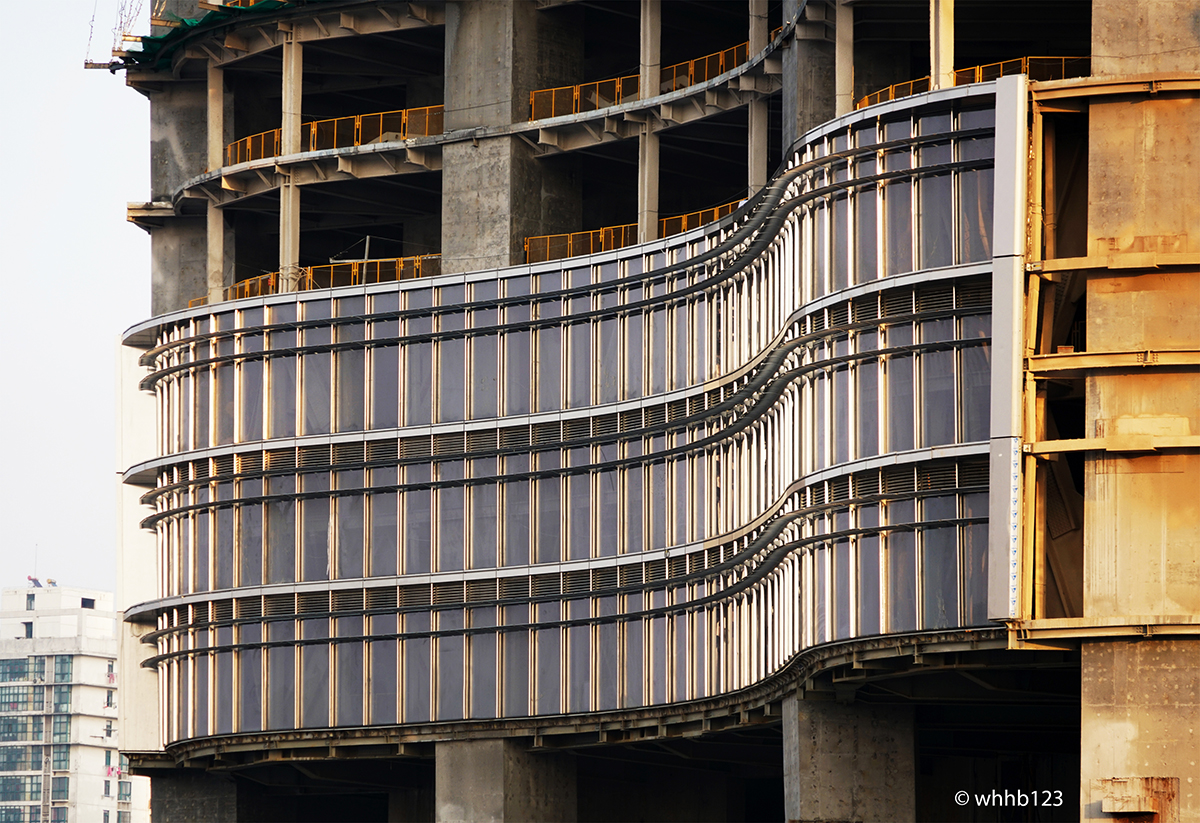 Wuhan, the capital city of Hubei Province in central China, is located on Jianghan Plain which joins the Hanjiang River and the Yangtze River. Divided by the Yangtze, Wuhan is known as the “Three Towns of Wuhan” with Hankou and Hanyang on the west bank, and Wuchang on the east. The three tapered sides of Wuhan Greenland Center represent the three cities and two rivers that intersect to form one unified city.

“One of the distinctive features of Wuhan Greenland Center is the innovative introduction of vents at the tips of the three legs of the tower at vertical quarter sections. The vents will reduce wind pressure on the tower and reduce the vortices that can cause horizontal acceleration of movement.  This feature, along with the elegant tapering of the tower, is an essential element in the performative design concept,” says AS+GG Partner Adrian Smith. “Another important feature is that the tower exterior wall is made up of both vertical polished stainless steel fins and perforated aluminum horizontal sun shading devices that will protect the interior from both strong mid-day and afternoon solar conditions.”

A variety of sustainable approaches were incorporated into Wuhan Greenland Center that will make it one of the most energy-effective supertall buildings in the world, with an energy savings of  51% compared to a typical office building: a greywater recovery system takes waste water from hotel laundry, sinks, and showers and then reuses it in the building’s evaporative cooling system; a high-efficiency lighting system uses low-energy-consuming ballasts and lamps to reduce required power consumption; and water-conserving low-flow plumbing fixtures will reduce the total amount of potable water required as well as the associated pumping energy.

“This architecture represents the combination of formal relationships (the art) of performance and technical aspects ( the science) of performance which we like to refer to as Form Follows Performance. The inlets and dome reduce wind loads and consequently allow the structure to be more efficient and overall, the sustainable systems range from cutting-edge technologies to fairly low-tech solutions,” says AS+GG Partner Gordon Gill. “An Energy-recovery system which captures energy from the building’s exhaust systems and then uses it to pre-heat or pre-cool air entering the building is incorporated into the ventilation design and daylight-responsive controls and sensors automatically turn off electric lights when sufficient daylight is available. Consequently, this is genuinely a purposeful approach to design, both inside and out."

AS+GG Partner Robert Forest adds, “There is an economics to sustainability and there are many reasons to build high-performance buildings: they have lower operating expenses, they provide a better work environment, and they help companies meet their goals for reducing greenhouse gas emissions. Wuhan Greenland Center’s design is both distinctive and efficient. Its aerodynamic form actually uses less structural material – and therefore is associated with less embodied carbon – needed for construction, saving the client a substantial amount of money.”

Wuhan Greenland Center is a unique blend of the art and a science of Architecture. A purposeful form expressed through a cost effective and functional rationale; an architecture with a strategic performance-based design that is a direct expression of external forces. The tower will be a 21-Century landmark for the city when completed in 2017.