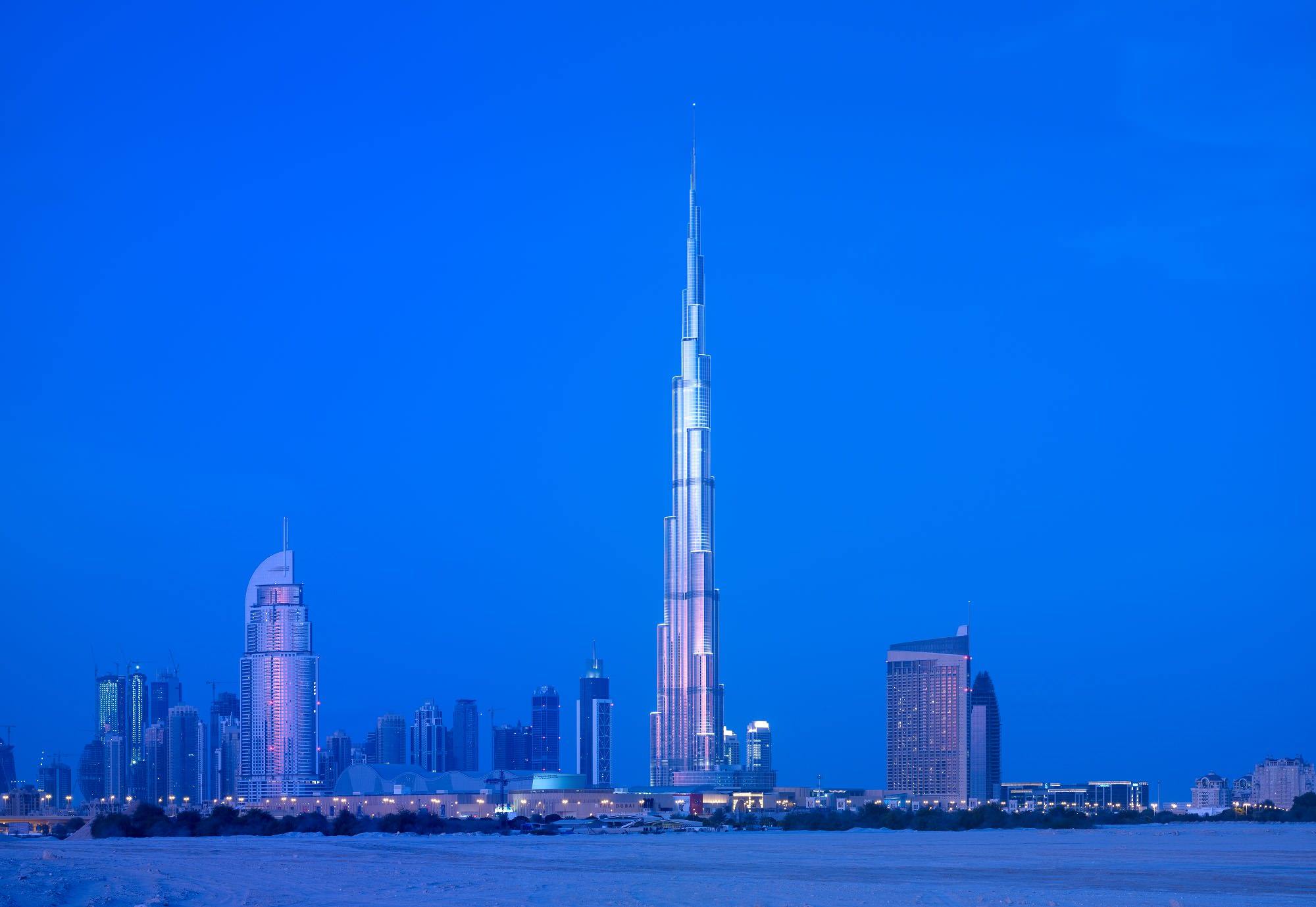 The tallest building in the world, Burj Khalifa (formerly Burj Dubai) is a new landmark for the United Arab Emirates. The tower’s organic form is derived from the culture and landscape of the region, strongly connecting the building to the surrounding context.


A mixed-use tower, Burj Khalifa will have residences and commercial spaces apart from the Armani Hotel Dubai, a luxury hotel developed by Emaar in association with haute couture major Giorgio Armani S.P.A. There will also be recreational facilities and entertainment venues including four luxurious pools, a cigar club, a library, exclusive residents’ lounge, serviced residences, 15,000 square feet of fitness facilities and an observatory. At grade the site was developed into a field of fountains and geometric islands connected by landscaped walkways.

Setbacks occur at each programmatic element, decreasing the tower’s mass at it rises toward the sky. At the tower’s top, the central core emerges and is sculpted to form a finishing spire. Views of the Gulf and city are maximized throughout the building with a Y-shaped floor plan.

The project addresses environmental concerns and features an innovative condensation collection system. Hot and humid outside air meets the cooling elements of the building resulting in a significant amount of condensation that will be collected and used for irrigation of the tower’s landscape plantings. This system will provide about 15 million gallons of supplemental water per year, equivalent to nearly 20 Olympic sized swimming pools.


19 apr 10 | Cityscape Intelligence
Burj Khalifa - a true icon
Burj Khalifa, the tallest building in the world which forms the iconic centerpiece of Downtown Dubai, has been named the winner of the mixed use project award in the prestigious Cityscape Awards for Real Estate in the Middle East and North Africa... MORE


feb 10 | Forest & Bluff
The man who made it possible
On January 4,20 10, our very own Adrian Smith of Lake Forest attended the opening ceremony of the Burj Khalifa, previously known as the Burj Dubai, in downtown Dubai of the United Arab Emirates... MORE


18 jan 10 | The Orange County Register
San Clemente gave architect of world's tallest building a foundation
Adrian Smith, who designed the 2,717-foot Burj Khalifa skyscraper in Dubai, grew up in San Clemente. At 65, he's competing to design a building in Saudi Arabia that may be even taller... MORE


9 jan 10 | The National
Ancient practice of feng shui underpins soaring achievement
The Burj Khalifa has a towering fascination with the number 8... MORE


9 jan 10 | The National
Sky is still the limit for architect
The global downturn may have brought an end to many planned tall buildings around the world, but Adrian Smith, the Chicago-based designer of the Burj Khalifa, believes there is still a future for these epic structures, even in Dubai... MORE


7 jan 10 | The Providence Journal
David Brussat: Superman, meet Dubai’s superscraper
SUPERMAN could not, if he were alive today, have leaped the newly opened Burj Dubai in a single bound. It is the tallest building in the world. He would have had to fly over it. And if he did fly over it, he might not, as the photo above attests, be able to see the ground (at least not without using his X-ray vision)... MORE


7 jan 10 | Spiked
What’s wrong with towering ambition?
Burj Khalifa in Dubai, the tallest manmade structure in history, stands in glorious contrast to the pessimism of the West... MORE


5 jan 10 | Emirates Business
The impossible transformed into reality
The biggest challenge during the building of the Burj Khalifa was to exercise caution, according to Mohamed Alabbar, Chairman of developer Emaar Properties... MORE


5 jan 10 | Khaleej Times
Meet the architect of the world's tallest tower
Adrian Smith, creator of the Burj Khalifa and other iconic structures worldwide, has been a practising architect for over 40 years.
Meet the man who designed the building that has smashed all world records... MORE


4 jan 10 | Emirates Business
Soaring to the Sky
It is important for architecture to reflect the ethos of its location... MORE


4 jan 10 | The Chicago Tribune
The Burj Dubai: New world's tallest building shows that nothing succeeds like excess
If ever a skyscraper was burdened with great expectations, it is the Burj Dubai, the colossal, half-mile-high tower designed by Chicago architects that opens here on Monday. This high-rise isn't simply meant to shatter height records... MORE


4 jan 10 | The New York Times
Dubai Opens a Tower to Beat All
Burdened by debt and a devastating real estate crash, Dubai is doing what it does best: doubling down... MORE


3 jan 10 | The Chicago Tribune
The tallest building ever (brought to you by Chicago)
As a boy, growing up about two blocks from the beach in Southern California, Adrian Smith built towering sand castles -- only to watch the Pacific Ocean wash them away... MORE


1 jan 10 | LA Times
The Burj Dubai and architecture's vacant stare
One of the odder, more complicated moments in the history of architectural symbolism will arrive Monday with the formal opening of the Burj Dubai skyscraper... MORE


8 oct 09 | CNN (online)
Sexy architecture alive and well in the Middle East
With all the pomp and money befitting its status as the world's richest city, Abu Dhabi will soon unveil its new Formula One track on Yas Island, a spectacular entertainment destination emerging from the turquoise waters off the coast of the Emirati capital... MORE


11 feb 09 Blueprint magazine (online)
Reject the Dubai clichés
It is time to reassess the extreme clichés about Dubai. To many, it is a fabulous place, fast-forwarding into the future with stunning, drop-dead architecture... MORE


15 jan 09 L'esspresso (Translated from Italian)
The new design is born
Every great architect has his own specialty. The Iraqi Zaha Hadid prefers fluid forms, the self-educated Tadao Ando is famous for his minimalist rigor... MORE


dec 08 Millionaire
Yearning to soar
Structures that touch the sky have fascinated us from time immemorial, wither it is for their utility value – like a communications mast – or for their beauty and sense of achievement – like Burj Dubai, now the tallest manmade structure in the world... MORE


14 oct 08 | Building (online)
The tallest building in the world: the contenders
Five new towers have been proposed for the Middle East recently with each claiming the mantle 'world's tallest building'... MORE


8 oct 08 | The National
Tall buildings put us on the map says Burj Dubai architect
In a city where it seems that almost all development seeks to be iconic, the architect behind the Burj Dubai said a greater concern is allowing buildings whose designs are different for the sake of being different and will not add anything to the social life of the city... MORE


2 sep 08 | Daily Mail UK
The world's tallest building, Burj Dubai, reaches 2,257 ft...and it's still growing
The statistics are almost as spectacular as the view. This is Burj Dubai and, once again, the editors of the Guinness Book of Records have got to rewrite the chapter on buildings... MORE


12 aug 08 International Herald Tribune
Rising in Dubai: Adrian Smith's vision of green: tall and getting taller
Just over a year ago the office, hotel and condo tower known as the Burj Dubai became the tallest building in the world... MORE


10 aug 08 | The New York Times
Reaching for the clouds in Dubai
Just over a year ago the office, hotel and condo tower known as the Burj Dubai became the tallest building in the world... MORE


20 jul 08 The Sunday Times
Towers and ambitions
The buildings will be some of the most amazing the world has ever seen - but will investors be able to carry on marvelling... MORE


20 jul 08 The Sunday Times
Follow the money as it builds the future
The numbers are staggering: 3m jobs, 15m tourists, hundreds of billions in investment. We get our heads around a brave new world... MORE


15 jun 08 | The New York Times
Scraping the sky, and then some
The world's population is expected to climb to nine billion by the middle of the century... MORE


1 jun 08 | Focus
The rise and rise of the superscraper
The race is on to build the world's tallest skyscraper. Ian Taylor looks at current front-runner the Burj Dubai - and at what else is to come... MORE


11 may 08 | The Sunday Times
Dinosaurs bite the dust
A new wave of building design leads the drive to reduce the environmental and financial costs of doing business... MORE


1 may 08 | Gulf Life
Head in the clouds
The Burj Dubai is the world's tallest structure, a towering icon for the Emirate and a testbed for the giant buildings of the future... MORE


7 mar 08 Emirates Business
Giving shape to big ambitions and tall buildings around the world
In 2003, Emaar held a competition to design the world's tallest building to be built in Dubai, which Adrian Smith won... MORE


nov 07 | Metropolis
Beyond the spectacle
Fifty years from now, New York will be considered the economic and cultural capital of the previous century... MORE


17 aug 07 Architectural Record
The skyscraper: still soaring
The world is awash in new skyscrapers. But does this type of building really have a place in the modern world... MORE


24 jul 07 Chicago Sun-Times
Chicago architect says world's tallest building still growing
It's going to be taller - a lot taller - but a Chicago-designed skyscraper still under constrcution in the United Arab Emirates is already the tallest building in the world... MORE


may 07 | Architect
Arabian heights
How does an emerging global power announce itself? With the world's tallest building... MORE


jan feb 07 The American
Lust for height
The Burj Dubai, slated to be the tallest building in the world when it's done in 2009, is rising 160 stories or more (the final height is a secret) in the desert... MORE


27 nov 05 The Chicago Sun-Times
Man of steel: Able to leap tall buildings
On opposite sides of the globe, and at the same time, two great towers are rising... MORE


27 nov 05 The Chicago Sun-Times
Trump is beefsteak; Dubai is frosting
One is handsome but matter-of-fact and oh-so-muscular skyscraper for the City of Big Shoulders, its elegant sheen barely disguising its underlying assertion of power and practicality... MORE