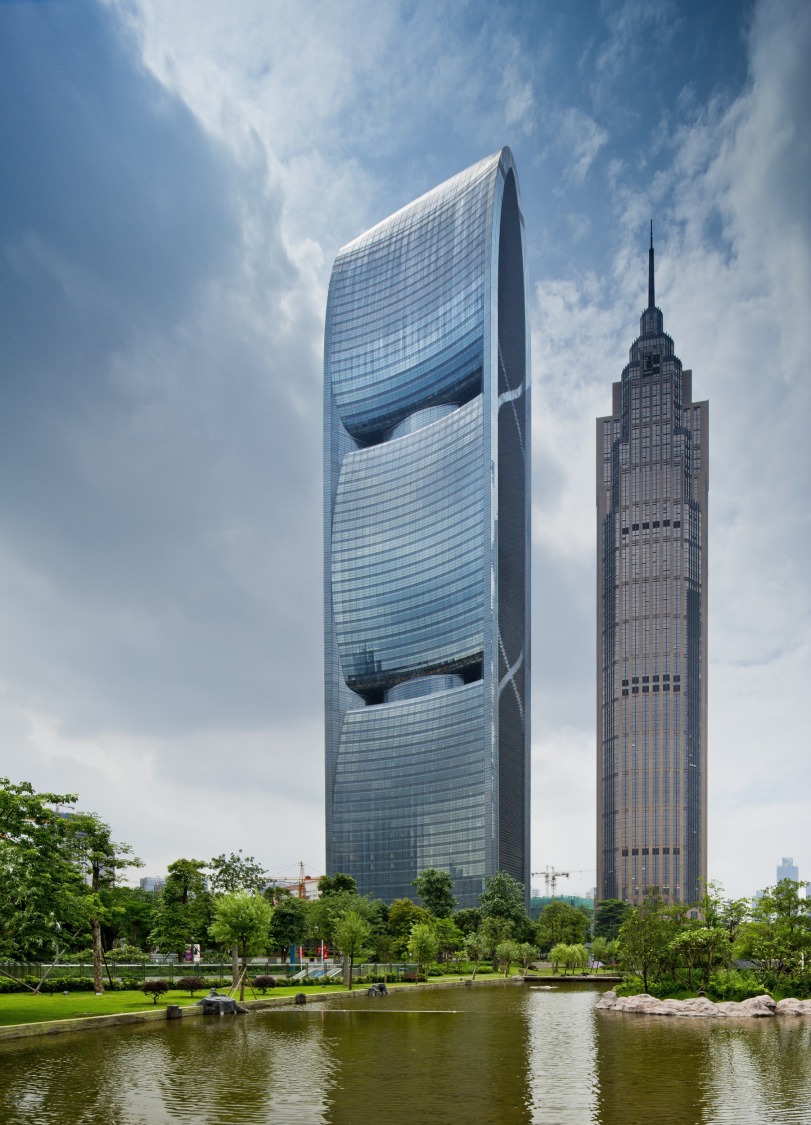 Pearl River Tower in Guangzhou, China represents a new kind of building: a skyscraper formed to work symbiotically with the natural environment. The project was designed to be the world’s first supertall tower that produces most of the energy it consumes.

Pearl River Tower represents a true symbol of progress for the 21st century: a self-sustaining, environmentally intelligent building that is a stunning new icon for the region. Every element was designed to optimize the building’s energy and sustainability performance. The unique shape was derived from the behavior of the natural elements on the site and was optimized to local solar and wind patterns, harnessing the energy of these resources and utilizing this natural power to sustain the building. Wind is funneled down the vertical face of the tower toward a series of energy generating wind turbines and photovoltaic panels in the building’s skin absorb and retain solar energy.

The two sets of wind turbines are integrated directly into the building and located at each mechanical floor. These turbines serve to generate power that is fed to the mechanical equipment with minimal losses. By adding curvature to the double wall facade, the entire building acts as an air intake to the turbines, maximizing the velocity and the potential energy rendered from the system. The energy created by the turbines is used immediately or stored in batteries for later use. Additional energy comes from a geothermal heat sink that is utilized throughout the building. The intent of this system is to reduce the electrical and water energy consumption associated with the facilities cooling system.

Typical HVAC cooling systems use cooling towers to remove all the heat energy from the building and reject the heat to the outdoors. This process requires large quantities of fan energy and, with evaporative type tower, large volumes of water are consumed by the system. Pearl River Tower's HVAC equipment passes the cooling tower water through embedded tubes, within the building’s caissons, prior delivering it to the cooling towers. Using the energy of the earth, the amount of fan energy and water consumption will be reduced greatly. The system will also have the capability of “recharging” the energy in the earth, during hours when the water, within the cooling tower, falls bellows the natural temperature in the ground. This reduces energy consumption on the following day.

In addition to its superior performance, the tower also represents the pinnacle of quality for a world-class headquarters facility. The client desired a building that would represent and enhance their position as a global leader and an active participant in the sustainable design movement. It was equally important that the building provide the highest quality of workspace for the company’s staff. The tower was designed to satisfy all of these requirements, resulting in a building that represents the intersection between performance and function.


21 sep 12  | The Wall Street Journal
Designing Towers to Catch the Sky
Gordon Gill, an architect in Chicago who specializes in very tall, energy-efficient structures, doesn't spend much time looking at buildings. Mr. Gill said that he gets better ideas by looking at lakes or trees rather than Chicago's broad-shouldered skyline. The city's notorious blasts of wind are another inspiration... MORE


26 mar 09 | Chicago Reader
Best of Chicago 2009 art & architecture
We no longer butcher many hogs or make much steel, but Chicago can still turn out talented architects—and Gordon Gill is one to keep an eye on... MORE


11 may 08 | The Sunday Times
Dinosaurs bite the dust
A new wave of buildng design leads the drive to reduce the environmental and financial costs of doing business... MORE


7 nov 07 | The Chicago Tribune
Developers embracing 'green' to gain edge
Real estate long had one guiding principle: location. Now, environmental sustainability has joined the top tier of industry tenets in these times of financial turmoil and fierce competition for renters and workers... MORE


4 nov 07 | The Sunday Times
City Salvation
From pigs grazing on the roof to colossal solar power stations, future buildings will be clean and self-sustaining... MORE


7 sep 07 | GQ
Green Giants: A guide to the ten coolest eco-friendly buildings in the world and how they're truning architecture on its head
It should come as no surprise that in the face of the world's growing environmental problems, it is in architecture that we find some of the most innovative and beautiful-solutions... MORE


sep 07 | The Architect's Newspaper
Imitation of life
Since the days of Vitruvius, architects have turned to nature for inspiration, but today's designers are think about the way a seasponge behaves, not just the way it looks... MORE


aug 06 | Wallpaper
Peak performance: eco-friendly offices in Guangzhou
It's being billed as the most environmentally sustainable buildings in the world... MORE


1 dec 06 | Architectural Record
SOM's Pearl River Tower
The storied design firm has set its sights on redefining one of its bread-and-butter project types, the corporate headquarters, into a model of high-tech sustainability... MORE