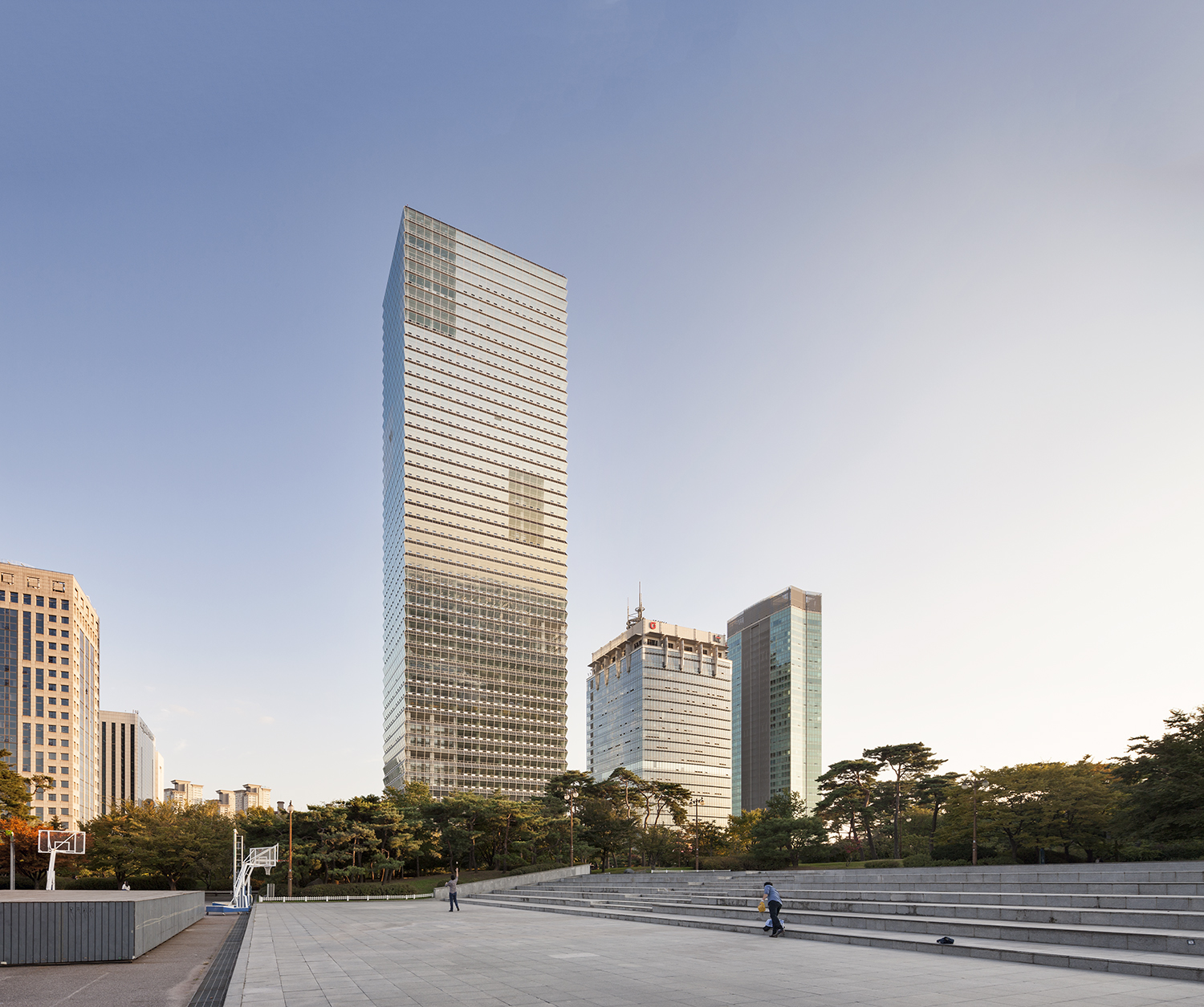 Completed in January 2014, FKI Tower is the new headquarters building for the Federation of Korean Industries (FKI) and is a major addition to the skyline of Seoul, Korea. FKI represents major Korean companies such as Samsung, LG and Hyundai Motors.

The new headquarters is located on Yeoi-Dae-Roh, the main through-road in Seoul and is now a prominent fixture among the wall of marquee buildings along the road, directly across the street from Yeoido Park. The tower’s position guarantees spectacular views on all sides, adding to the world-class setting similar to New York’s Central Park or Chicago’s Magnificent Mile. The 50-story, 240-meter tower features an innovative exterior wall, designed specifically for the project. The building’s unique skin helps reduce internal heating and cooling loads and collects energy through photovoltaic panels that are integrated into the spandrel areas of the southwest and northwest facades.

The concept for FKI Tower was developed by combining the client’s request for a building that was contextual to the predominantly orthogonal architecture of the Yeoido District and the city’s requirement that all new large-scale commercial buildings generate a minimum of 5% of their energy onsite. The design team developed a strategy that would meet both requirements as well as reduce the amount of energy that the building used for its heating and cooling loads. The use of building integrated photovoltaic panels (BIPV) was seen as an architecturally appealing way to meet the strict zoning requirement, while the optimization of the panels became a driving factor in developing the architectural expression.

FKI Tower's exterior wall system combines maximum access to views, energy efficiency strategies and energy generation technologies. By angling the spandrel panels 30 degrees toward the sun, the amount of energy collected by the photovoltaic panels is maximized. Below the spandrel panels, the vision panels are angled 15 degrees toward the ground, minimizing the amount of direct sun radiation and glare. The end result is a unique folded exterior texture that is both purposeful and visually distinctive. Benefits include a reduction of glare and heat gains from direct sunlight, while maintaining a high level of indirect light. With the exception of the early morning and the late afternoon periods, the building is able to use the geometry of the exterior wall to self-shade the perimeter spaces that would normally be inundated with direct sunlight. This gives the building occupants the flexibility to open the shades and allow indirect natural light.

The site organization was rearranged from the original competition brief by sliding the tower to the west. This opened up more site frontage and allowed the podium to be closer to the street. This positioning gave the podium a presence and identity unavailable if it was located behind the tower. The new arrangement also allows more space for outdoor landscaped courtyards for public use. The building’s site takes advantage of the neighboring parks, positioned so that arrival sequences for pedestrians, subway commuters and VIP parkers are landscaped to extend the park setting into the building ground plane.

The tower’s interior includes several indoor garden and atrium spaces that enhance the workplace environment with natural elements of wood, bamboo and other native plants. The interior of the building takes advantage of the floor-to-ceiling windows of the exterior wall, offering an abundance of natural light to office spaces and corridors as well as extensive views of neighboring Yeoido Park, the Han River and the surrounding city.

FKI Tower features an expansive rooftop atrium garden that also has custom photovoltaic panels. The ideal angle of the panel placement on the roof was studied in detail. In a relatively unconfined space photovoltaic panels are angled upward at 30 degrees but within the limited area of FKI’s roof, it was determined that a 10-degree angle allowed for more panels to be installed closer together, minimizing the effect of the panels casting shadows on each other and ultimately producing more solar energy for the building. When analyzing the roof skylight photovoltaic panels, it was equally important to account for self-shading so that enough natural light would be let into the sky garden below. The garden is planted with Korean Boxwood, a lush and hearty shrub that is also low-maintenance. The rooftop atrium also has several seating and viewing areas that tenants can sit and enjoy views of the surrounding city.

The sculptural podium piece is located on central Yeoi-Dae-Ro Avenue, further promoting the tower’s public identity. The podium amenities, available for public use, include a banquet hall, a central restaurant and a conference center. The podium is available for international conferences with a large first floor banquet hall and smaller conference rooms of various sizes located on the second and third floors.

may 16 | Design Diffusion
Playing with Angles
FKI Tower is a major addition to the skyline of Seoul, Korea... MORE


jan 15  |  American-Architects
Building of the Week: FKI Tower
Resembling a simple glass-box office building from a distance, up close the 50-story FKI Tower reveals a simple yet ingenious wall section that incorporates solar panels angled to absorb more of the sun's rays than a strictly vertical surface... MORE


28 jan 14  | Architect
The New Seoul Skyscraper
The FKI tower designed by AS+GG serves as a testament to how creativity and technology drive the Korean economy... MORE