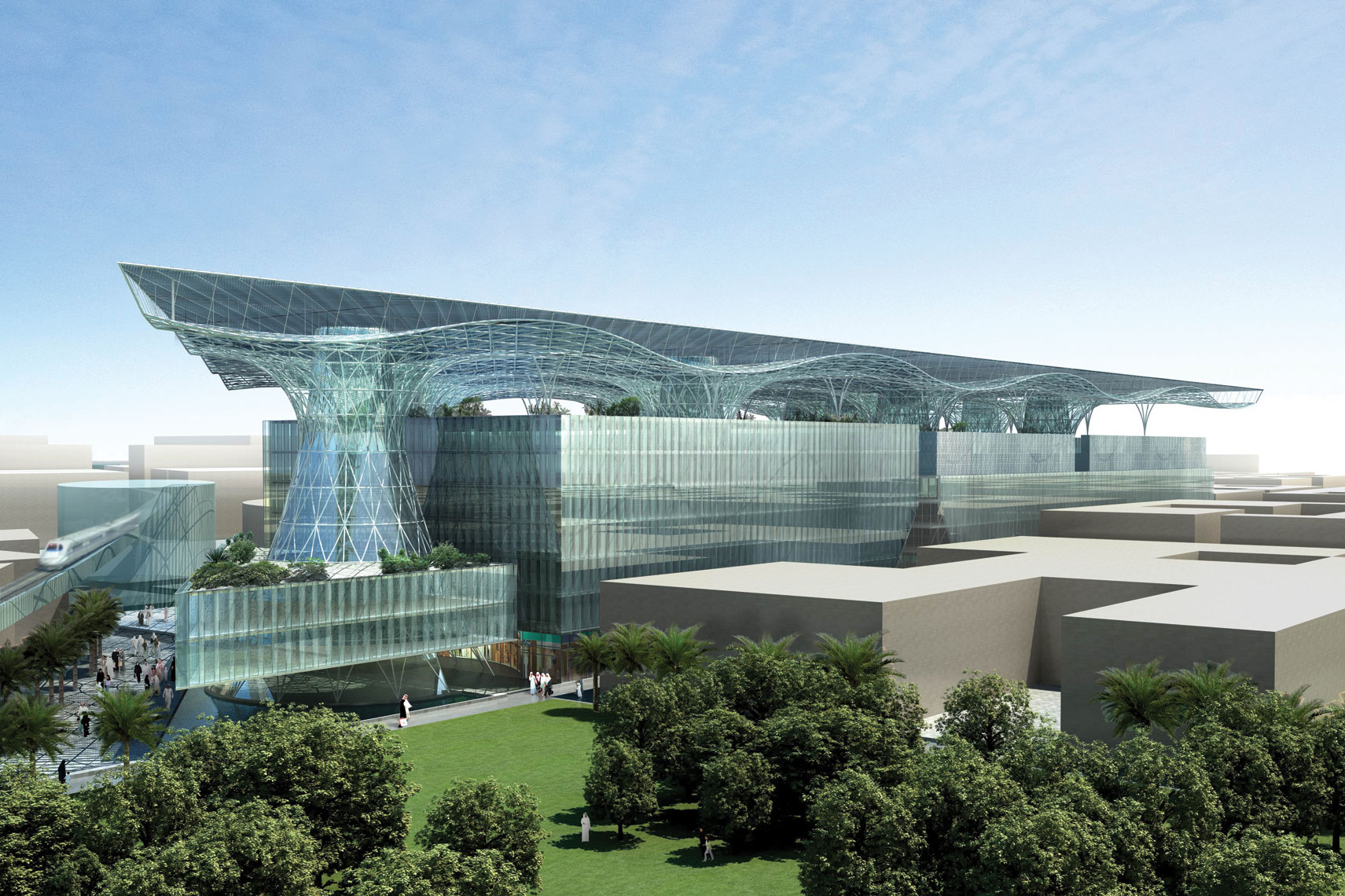 Masdar Headquarters was designed as the world’s first mixed-use, positive-energy building, using sustainable design strategies and systems to produce more energy than it consumes. The project was designed to be the centerpiece of Masdar City, a zero-waste, carbon-neutral development outside Abu Dhabi in the United Arab Emirates.

Masdar HQ’s signature architectural feature is a collection of eleven wind cones which provide natural ventilation and cooling (drawing warm air up to roof level, where wind moves it away) and form oasis-like interior courtyards and/or flexible spaces, each with its own theme, at ground level. The cones also provide soft daylighting for the building’s interiors.

Masdar HQ was designed as the world’s greenest mixed-use building, yielding zero carbon emissions and zero waste (both liquid and solid) and a sustainable measure beyond LEED platinum. It was designed to consume 70 percent less water than typical mixed-use buildings of the same size, and be the lowest energy consumer per square meter for a modern Class A office building in a hot/humid climate.

It was also designed to be the first building in history to generate power for its own assembly via one of the world’s largest arrays of photovoltaics on its roof canopy, providing shade for workers during construction of the structure’s lower levels.

spring/summer 11  | One
(Re)Conceiving Cities
Whether building a city from scratch in Abu Dhabi or retrofitting the Chicago Loop, architect Adrian Smith says 21st-century cities need to be clean, grean, and user-friendly... MORE

28 apr 11  | Nissan Technology Magazine
5 Guests - 2025, the future of mobility and our cities
Predicting what cities will be like 25 years from now, and what they should be like at that time, are, of course, two different tasks... MORE

25 sep 2010 | The New York Times
Planning a Sustainable City in the Desert
Promoters of Masdar, a city under construction near Aub Dhabi, say that it will be the world's first carbon-neutral city... MORE

20 oct 09 | The New York Times
New agency to lead global energy push
The International Renewable Energy Agency, set up this year to lead a global crusade for renewable energy development and sharing of technology between the developed and developing worlds, has come a long way in a short time... MORE

aug 09 | Architecture and Urbanism
Relationship between design and construction
Masdar Headquarters will be the world's first positive-energy building, using sustainable design strategies and systems to produce more energy than it consumes... MORE

26 mar 09 | The Chicago Reader
Best of Chicago 2009 art & architecture
We no longer butcher many hogs or make much steel, but Chicago can still turn out talented architects—and Gordon Gill is one to keep an eye on... MORE

dec 08 | Fortune
A green city blooms in the desert
Abu Dhabi, which reckons the world will wean itself from fossil fuels, is building a city that runs on solar power, recycles all waste, and bans cars... MORE

dec 08 | Architect
The comeback kid
Adrian Smith didn't want to retire. Turns out his clients didn't want him to, either... MORE

11 nov 08 | Globe and Mail
A building with an energy all its own
New design frontier aims to make structures more than zero users of enrgy but power plants in their own right... MORE

nov 08 | identity
Green Giants
Although none denies the need to make buildings eco-friendly, the main concern was for the quality of life... MORE

oct 08 | Metropolis
Innovation from the innovators
Metropolis asked some of the world’s most forward-thinking architectural and engineering firms to name their newest green products and systems... MORE

18 oct 08 | Globe and Mail
Market panic? Bring it on
If there is a new imperative in this desperate economy, it is surely to build more intelligent architecture... MORE

24 jul 08 | domain-b
GE focuses on Middle East with $8-billion carbon-neutral city
In a clear sign of the slowing US economy and the growing importance of oil money in today's world, century-old American conglomerate General Electric (GE) has announced an $8-billion joint venture in the Middle East at the same time it is cutting down its operations at home and in other developed countries... MORE

summer 08 | Centerline: Newsletter of the built environment at University of California, Berkeley
Getting to zero: how CBE industry partners are meeting net-zero energy goals
Along a typical commerical strip in san Jose, California, an unassuming office building is gaining notoriety for its ambitious sustainability goals... MORE

7 may 08 | Architectural Record
Smith + Gill tapped for ultra-green Abu Dhabi project
Desert buildings that produce more energy than they consume may no longer be a mirage... MORE

29 feb 08 | Building Issue 8
The Middle East green building challenge
Now that the ruler of Dubai wants the city to be at the forefront of sustainable design, how will developers respond?... MORE