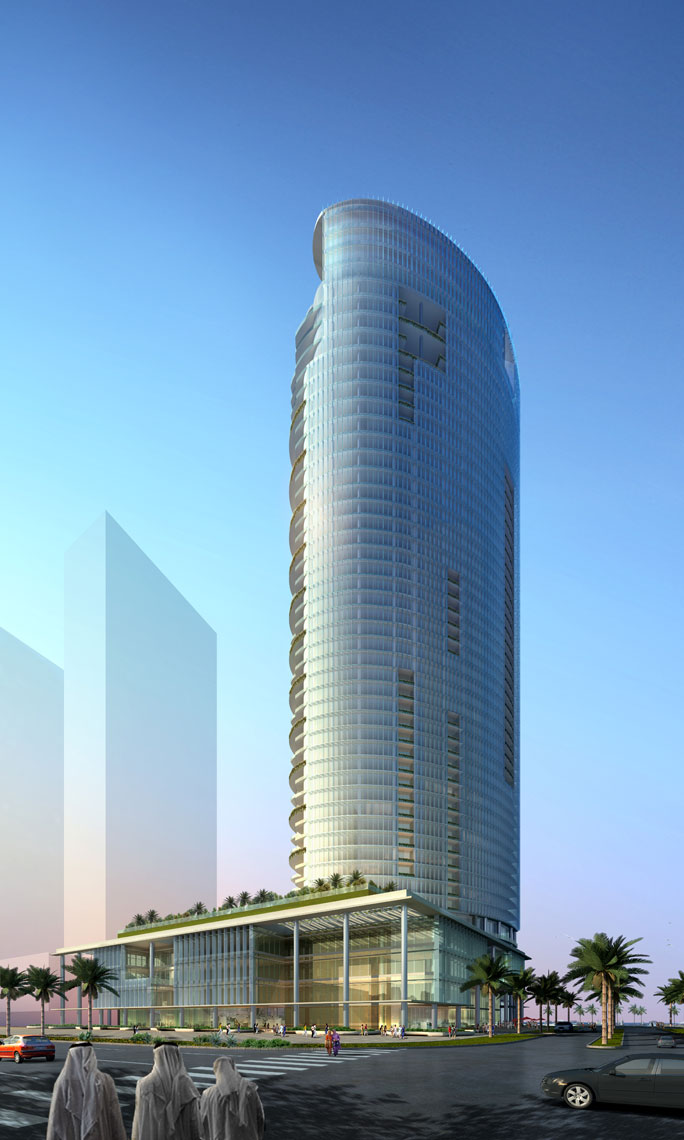 Verde Residences was designed as part of a two-tower, mixed-use development in Dubai’s Maritime City. The sustainable, high-performance project, created to achieve a LEED Gold rating.

The 49-story residential tower, has a total area of 1.35 million square-feet, including luxurious two- and three-bedroom units, three- and four- and five-bedroom penthouses and four-bedroom duplex townhouses at the podium level facing the harbor. The development also features retail space along the harbor promenade.

Verde Residences is shaped to open up panoramic views to the northeast toward the Persian Gulf. Shaded terraces and sky gardens throughout the residential tower and podium allow residents to enjoy the outdoors. Inside, residents enter through a soaring, six-story lobby.

The tower's shape also helps minimize the impact of solar and wind forces. Its orientation on the site allows the tower to shield itself from the strongest solar gain with its minimal west and east facades and to optimize wind collection for wind turbines. Other sustainability features include a green roof deck with indigenous landscaping to minimize water consumption; a district cooling system; roof-mounted and facade-integrated photovoltaic cells, which also provide exterior shading; solar hot water collectors for solar cooling; and environmentally responsive interior shading and lighting controls.

On-site-generated energy from renewable sources reduces energy demand in the residence tower by 90 percent compared to typical buildings of the same size. Energy produced by the Verde Residences will reduce carbon emissions by more than 18 metric tons, equivalent to planting about 300,000 trees or removing 340 cars off the road yearly.

15 may 08 | Al Bawaba
ETA Star's 'green' campaign on Channel 4 is an instant hit among listeners
ETA Star Properties, a leading property developer in the UAE, and Channel Radio 4 Network have announced the successful completion of a campaign at spreading awareness on effects of Global Warming among the public... MORE