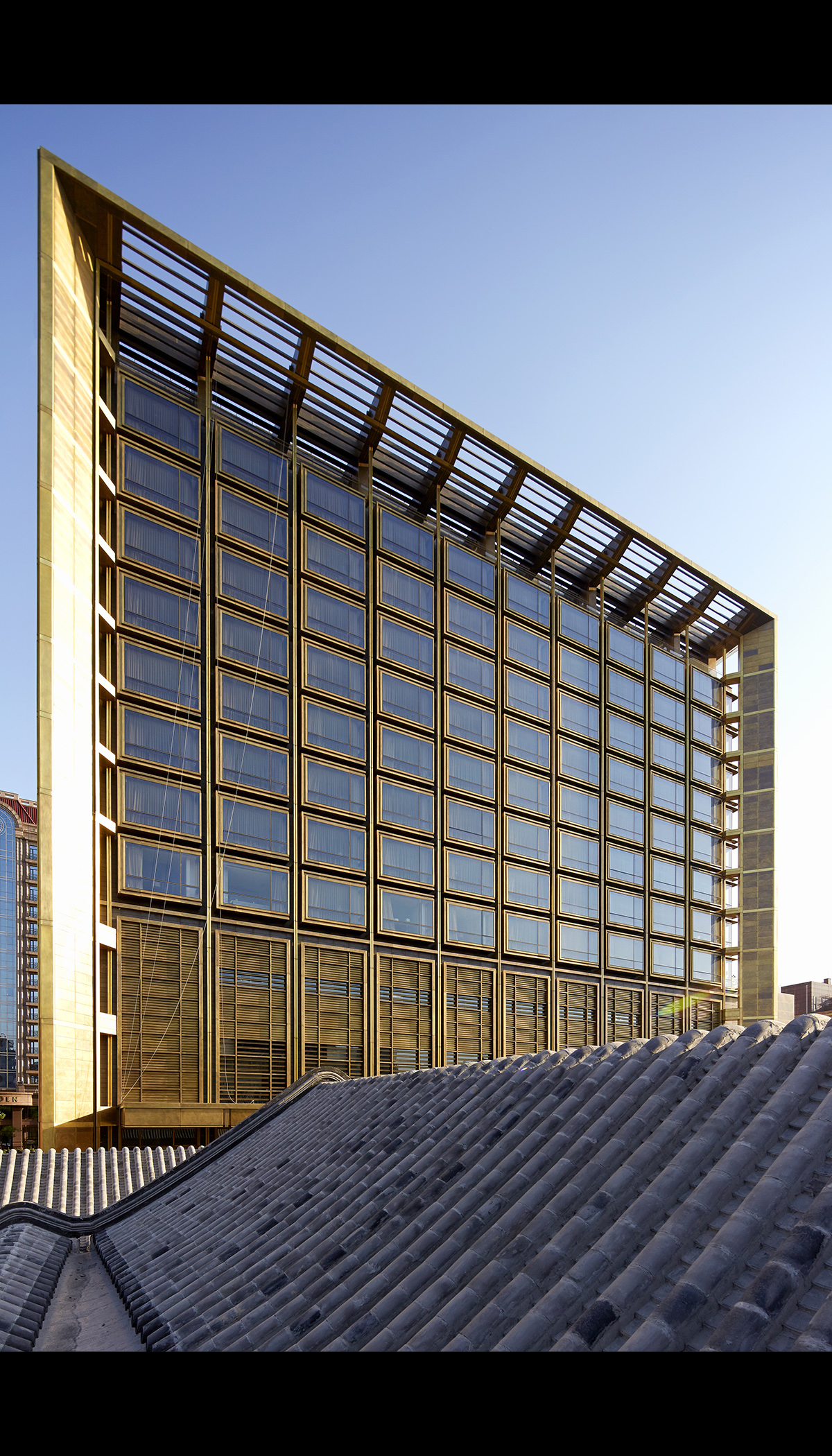 The new exterior wall and 50-meter superframe for the Waldorf Astoria in Beijing, China was designed for the 176-room hotel as a contemporary interpretation of the Forbidden City, China’s nation’s most important historical treasure.

The luxury hotel is located in the heart of downtown Beijing, China, next to Wang Fu Jing, the famous high-end walking shopping district, two blocks west of Forbidden City. Stylistically this influence can be seen in the hotel’s symmetry, prominent eaves, and the generous use of bronze.
The design team’s intention was not to directly evoke Chinese architecture but to subtly reflect it in its use of materials and its strong sense of richness. The exterior is featured with bronze - the royal material which expresses the luxury, dignity, and legend of the Waldorf brand, and reflects the character of the site location. The super frame, connecting the roof and anchoring building corners successfully, recalls the symmetry and steady character of Chinese traditional architecture.

The carefully detailed bay window with large floor to ceiling glazing provides the best city view for each guest room and creates the unique window room area with featured window screen for guest to enjoy the special living experience in Beijing.

While the bronze façade was designed as a thoughtful response to traditional Chinese and to represent the luxury brand of Waldorf Astoria. To achieve this goal, bronze was used in large areas of the walls, as well as on window mullions, small, cladded sunshades and perforated screens. Other high-end, traditional materials were used to the same effect; grey granite was used as a background material on the walls, which recalls the historic charcoal bricks of Beijing’s traditional residential streets. Luxury is also evident in the orientation of the façade. The bay windows are floor-to-ceiling, allowing guests to enjoy superior city views for each guest room.

Due to the project’s strict program, high land value and 50-meter height restriction, the design process was initially under highly constrained conditions, even saving the 100-year tree which graces the main entrance.

The design team collaborated closely with the client, COFCO, to re-shape the building massing while advancing the program and re-establishing the building structure and its interior layout grid. The end result is a beautifully done building that is contextual to the city, environmentally efficient, and true to the Waldorf Astoria brand.