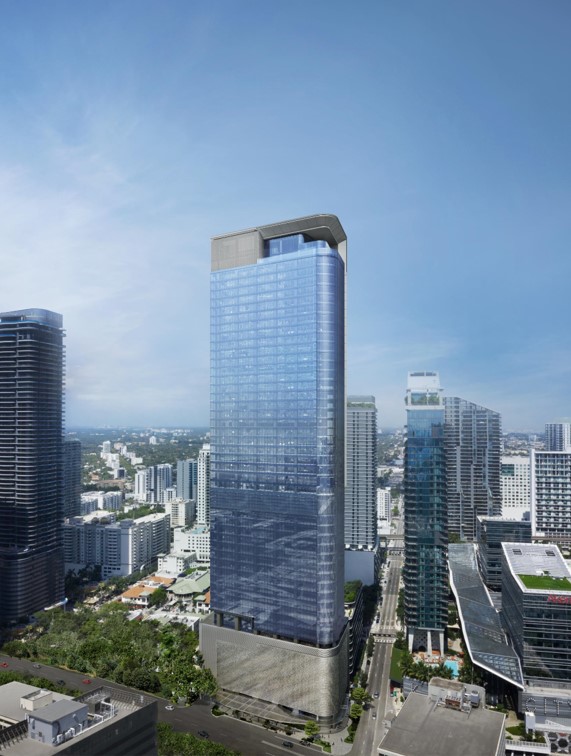 830 Brickell will be the first new office tower to launch in Miami in nearly a decade. The soaring 57-story, 724-foot-tall tower introduces a premium commercial to the city’s booming financial district and seeks to reinvent the workplace lifestyle for the highest-caliber of global workforce.

AS+GG’s design elevates the architectural expression of the building to the level of museum-quality art. Set in Miami’s Brickell neighborhood, 830 Brickell is at the center of the city’s most exciting cultural, culinary, and retail experiences. Tenants have direct, walkable access to Brickell City Center, Mary Brickell Village, and Downtown Miami offering a suite of upscale hotels and restaurants. Known as the city’s financial district and the Wall Street of Latin America, Brickell is a rapidly transforming neighborhood for residents, tourists, and businesspeople.

The building will have unprecedented lifestyle offerings for a commercial tower, which will promote out-of-the-box collaboration, work-life balance, and wellness. Amenities include a rooftop restaurant and two-story bar on the 56th and 57th floors, and a 30th floor sky lobby with a health and wellness center and first-class conference facility, parking with electric vehicle charging stations, cafés, and retail.

Vertical construction began in summer of 2019 with several global leaders including Microsoft, WeWork, Thoma Bravo, and CI Financial set to occupy 146,000 square feet in the 1,030,000-square-foot tower once completed.

27 Sep 22 | Commercial Property Executive
Miami’s 830 Brickell Tops Out
830 Brickell, Miami’s first Class A office tower to be built in the urban core in more than a decade has topped out... MORE

6 Oct 21 | The Next Miami
New Luxury Brickell Office Tower Being Selective About Tenants Due To High Demand For Space
The developers of a new luxury office tower across from Brickell City Centre have seen so much demand for space that they are being selective about tenants, according to the Herald... MORE

25 Mar 21 | Global Construction Review
Miami’s first Class-A office tower in a decade hits halfway point in booming Brickell
A 57-storey tower going up in Brickell, the financial district of Miami, has surpassed the 22nd level and is on track to be finished on schedule in 2022... MORE

10 September 19 | The Next Miami
New Details of 830 Brickell Released, Set to begin Vertical Construction Now and Become Miami’s Most Modern Office Tower
Vertical construction is about to begin at the 830 Brickell tower across from Brickell City Centre, and developers have released new details of what they say will be Miami’s most contemporary office tower... MORE