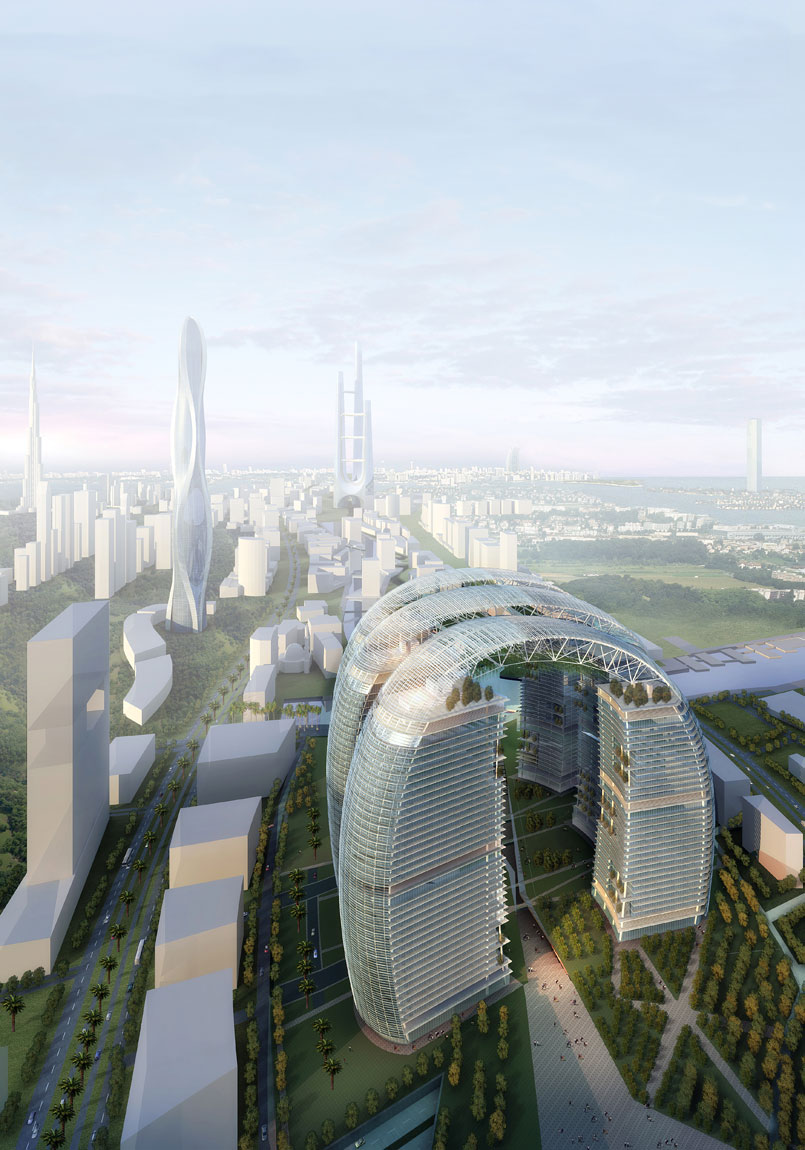 Park Gate is a 5,000,000 square-foot mixed-use development—including offices, retail and a hotel—that creates a visual portal into the adjacent sites.

The project’s six gently curving towers, arranged in facing pairs connected at the top by three vaulted canopies, surround a unique urban oasis inspired by the Middle East’s ancient and modern souks—covered markets that also serve as places to rest and socialize.

This central plaza, further protected by micro-canopies, boasts expanses of drought-tolerant greenery and reflecting pools. From balconies and sky gardens in the surrounding towers, users will enjoy inspiring overlooks of this outdoor “great hall,” which features indigenous, salt-water-tolerant plants (reducing energy needed to desalinate water) and reflecting pools that also act as thermal sinks, absorbing heat during the day and releasing it at night.

High above, the main canopies perform three sustainability functions at once: harvesting solar energy through photovoltaics on top; creating shade, which will reduce heat gain in the towers and can reduce temperatures on the ground by 10 to 15 degrees; and incorporating trellises from which hanging plants will grow in a thriving microclimate irrigated by a gray-water misting system. The canopies are semi-permeable (70 percent closed, 30 percent open) to allow dappled light through to ground level.

In the towers, whose sculpted form completes the curvature of the canopies, more sustainable design features and strategies are deployed. The towers are oriented to limit solar exposure and allow circulation of gulf breezes through the development. Landscaped sky gardens on some floors provide access to the outdoors and allow natural light to penetrate the interiors.

The towers on one side of the development are 37 stories tall, while the others are 34 stories tall, creating an asymmetrical effect. The towers are oriented to turn slightly in toward each other, heightening the sense of ensemble. Shading elements on the tower exteriors reduce solar heat gain.

Originally designed for a site in Dubai, the project was stalled during the 2008 economic downturn and remains unbuilt.

12 aug 2010 | inhabitat.com
Dubai's Park Gate is a Solar-Powered Desert Oasis
Just because a building is in the desert doesn't mean it has to be hot... MORE


nov 08 | Identity
The future is now
The best of design today's was celebrated and the outlook for the future mapped out at Cityscape Dubai, with the focus on sustainable projects providing a more eco-friendly tomorrow... MORE


nov 08 | Cityscape Magazine
New look for old
As Dubai's ongoing transformation migrates from the periphery of the city into its more established neighbourhoods, Clair Malcolm asks Meraas Development whether the US$95 billion Jumerira Gardens project truly represents the future of community living in the emirate... MORE


7 oct 08 | The Chicago Tribune
Chicago architects plan more towers in Dubai
Against a backdrop of nose-diving world markets, it sounds like a comic book fantasy: Three closely bunched, mega-skyscrapers would shoot in the sky, connected by skybridges and grand arches... MORE


9 May 08 | Gulf News
Dubai gives the necessary freedom designers need
Dubai: He has designed some of the world's tallest towers, but does not live in one... MORE


4 May 08 | Gulf News
Dubai will become city of supertowers
Iconic landmarks will be part of cluster of 11 projects worth DH25B... MORE