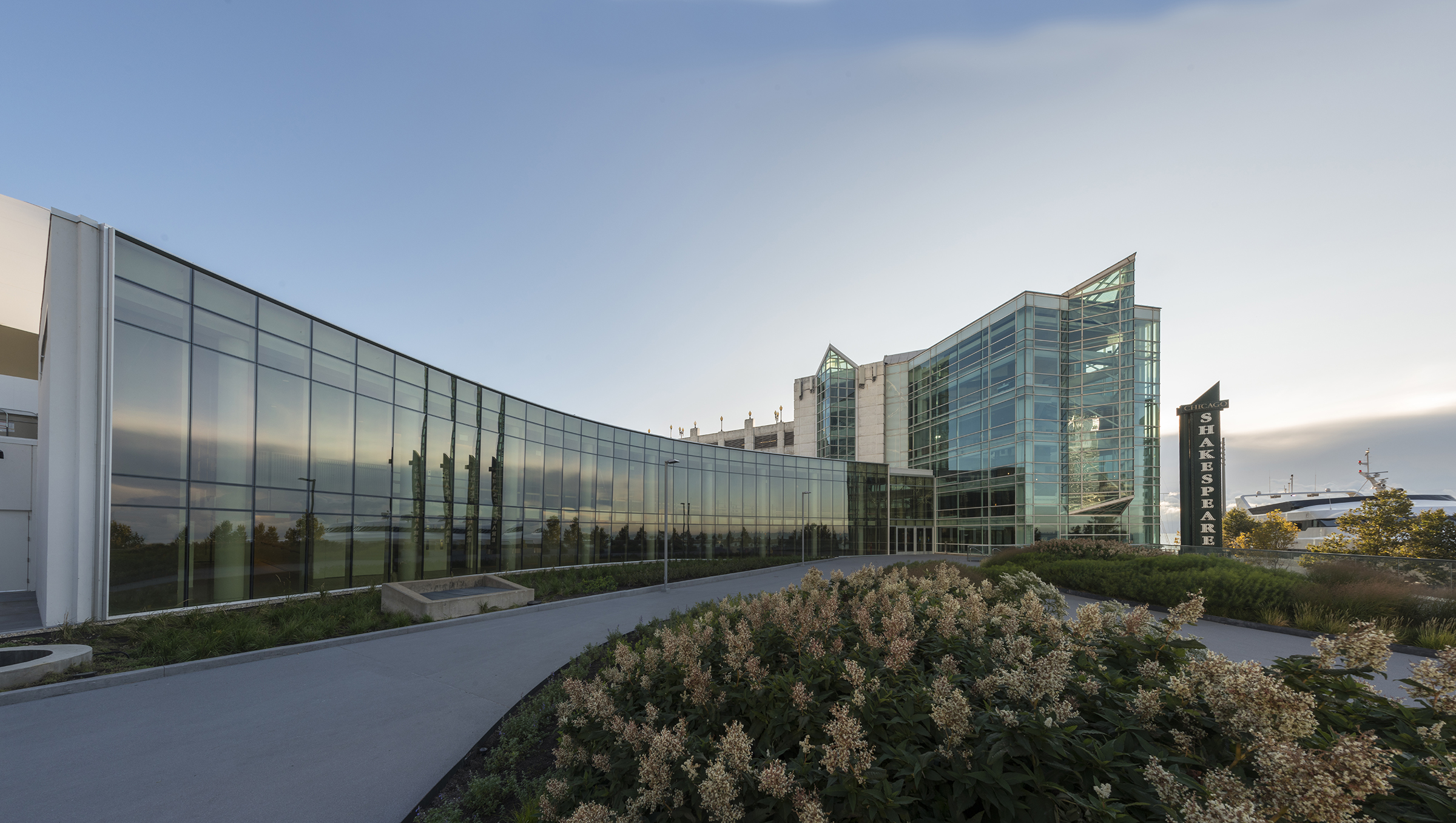 The Yard at Chicago Shakespeare Theater

The project features a new flexible theater and glazed two-story lobby and reception space, with magnificent views of Lake Michigan, that connects to the existing theater at Navy Pier. Consisting of 33,000 sf of space, the project introduces a global trend in theater architecture that focuses on resourceful, sustainable, and adaptive design. The new theater is artfully tucked beneath the existing signature white tent and above the existing parking garage. The new theater shares existing stage house and backstage support spaces.

To mitigate glare and heat, the lobby façade uses electrochromic glass. Designed with daylight sensors on the roof, the façade gradually tints when sunlight passes across its southern face. This unique solution is highly sustainable and will reduce heat gain and cooling needs. The geometry of the faceted curve creates dynamic reflections, inviting passersby to interact with the façade, heightening the theatrical experience. The “theatrical” nature of the façade is akin to the raising of the curtain, as it will be primarily tinted throughout the day becoming clearer in the evenings as the sun sets and the performances begin.

Another innovation is the theater’s flexible egress system that allows seating towers to be configured into nine different arrangements, adjusting the range of seating capacity from 250 to over 850 seats. The mobility of the seating towers is achieved through the incorporation of air casters at the base of each structure.

16 apr 18  | Modern Luxury Interiors Chicago
And the Winners Are...
The American Institute of Architects gives the stamp of approval to three very different Chicago projects... MORE

15 dec 17  | Chicago Tribune
Best architecture of 2017: Apple Store, Unity Temple and the Biennial in a remarkable year
With a new architecture biennial, a big Frank Lloyd Wright anniversary and a series of small gems, it was a very good year for Chicago architecture... MORE

20 sep 17 | Chicago Tribune
Flexible, intimate and innovative, The Yard at Chicago Shakespeare has its opening night
Navy Pier is slowly transforming itself from a hyper-commercialized shopping mall-by-the-lake into an appealing public space... MORE

9 Sep 17 | Chicago Tribune
Flexible, intimate and innovative, The Yard at Chicago Shakespeare has its opening night
Navy Pier is slowly transforming itself from a hyper-commercialized shopping mall-by-the-lake into an appealing public space... MORE

29 Jun 17 | American Theater
The Yard Beyond the Bard
A new lakefront flexible space gives Chicago Shakespeare Theater the room to expand, and not just physically... MORE