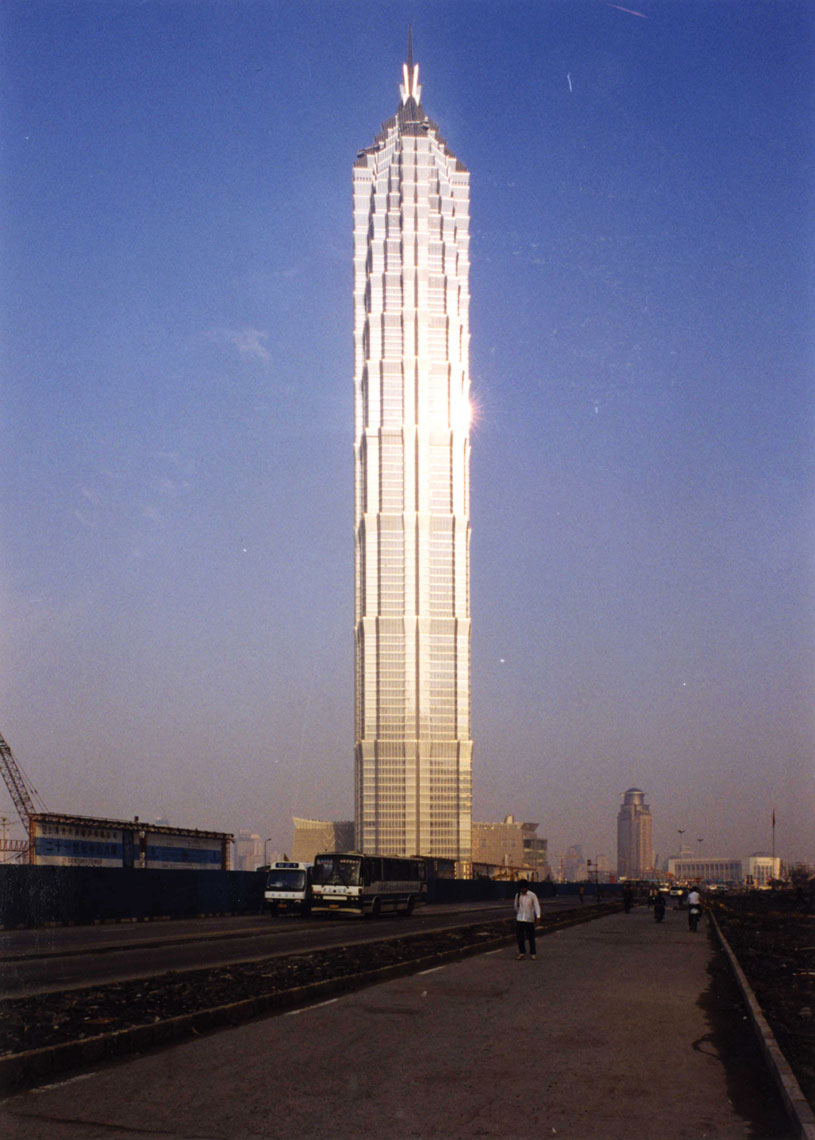 The concept for the Jin Mao Tower was to create a soaring modern tower that would become the central focal point of the Pudong District welcoming all who approach it. In a symbolic way, it is reminiscent of the ancient Chinese pagoda.

Jin Mao Tower is a 3 million square foot multi-use development, and is currently the world’s tallest mixed-use building. It houses a 555-room Grand Hyatt Hotel in the top 38 stories, affording impressive views of the city and the surrounding region. Office floors are in the lower 50 stories. Jin Mao’s six-story podium houses hotel function areas, a conference and exhibition center, a cinema auditorium, and a 226,000 square foot retail galleria. The base of the tower is surrounded by a landscaped courtyard with a reflecting pool and seating, offering visitors a peaceful retreat from Shanghai’s busy street activity.

In addition to the tower and podium, Jin Mao incorporates three below-grade levels with a total area of 615,000 square feet. These levels accommodate parking for 993 cars and 1,000 bicycles, hotel service facilities, additional retail space, a food court, an observatory elevator lobby, and building systems equipment areas. Above the 88th floor observatory are several floors for mechanical and maintenance equipment. The tower reaches a total height of 421 meters and is the tallest building in China.


15 aug 08 | The Chicago Tribune
Skyscraper wars, part five: Egos clash and cultures collide as Chicago architects reshape Asia's skylines
What happens when contrasting cultures come together through the medium of architecture? There is tension, to be sure, but significant aesthetic transformations can also emerge... MORE


12 aug 08 | The Chicago Tribune
Skyscraper wars, part two: Egos clash and cultures collide as Chicago architects reshape Asia's skylines
Put the city up, tear the city down; Put it up again,let us find a city. Poet Carl Sandburg penned those lines about turn-of-the-century Chicago. Today, they could be written about Asia... MORE


11 aug 08 | The Chicago Tribune
Skyscraper wars, part one: Egos clash and cultures collide as Chicago architects reshape Asia's skylines
Fourteen years ago, long before anyone knew that Beijing would be hosting the 2008 Summer Olympic Games, the following story of mine ran in the Chicago Tribune Magazine. At the time, Sears Tower had reigned for 20 years as the world's tallest office building... MORE


5 Aug 08 | The Chicago Tribune
Why do the Olympics start on 8-08-08 at 8:08 pm? For the sma reason that many Chinese skyscrapers are 88 stories tall
There's a simple reason for the profusion of eights in the Beijing Summer Olympics. The Chinese word baat, which means eight, rhymes with faat, which means good fortune... MORE


3 aug 08 | The Chicago Tribune
Behind Beijing's new icons...
How what we see on TV will be different than what Chicago wants to build fo rthe 2016 Olympics... MORE